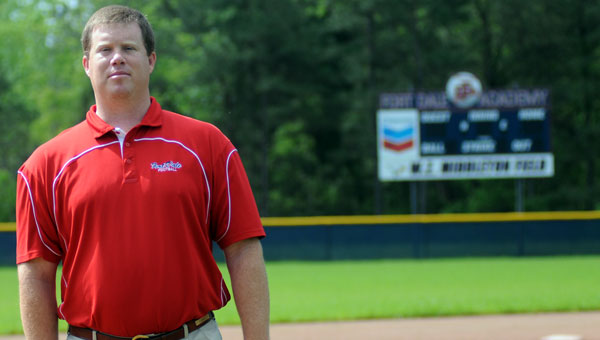 Watts has been named the school’s new head baseball coach, and few have been as excited about the news as Watts himself.

“I was ecstatic to have an opportunity to coach at a program like Fort Dale, and get to a sport that I love the most and grew up playing, and in the school that I grew up playing for,” Watts said.

“It was a real honor, and I want to thank Coach Speed and Mr. Brantley for giving me this opportunity.”

“I played three more years there and called it a career,” Watts added.

“It was a great career. I met a lot of great people along the way, and great friends through the wonderful game of baseball.  I talk to most of them every single day, so baseball has been very good to me.”

Fort Dale Academy headmaster David Brantley said that Watts brings much experience to the team, thanks to his college experiences, and that he would make an excellent role model and mentor.

“He has been a member of our faculty and coaching staff for the past three years,” Brantley said.

“I have known him for a long time and I respect the kind of person he is. He will have a great approach to coaching baseball and dealing with our players. He has outstanding leadership skills.  I look forward to him leading our baseball program.”

Watts has also served as head coach for the boys junior varsity basketball and football teams.

It’s unknown how his newfound position at the helm of the baseball team will affect the other two, but it wouldn’t be the first time he’s had a full plate.

“When I was at Cottonwood before down in Dothan, I coached three sports, and it’s definitely tough, especially on my family,” Watts said.

“But to get back to the game I love… I couldn’t pass it up.  And I don’t think it will have an effect on the other sports, certainly not right now.

“It may affect practice time in the spring when pitchers and catchers need to start getting out, but we’ll just have to play that by ear.  But we’ll make it work.”

Watts said that he’d prefer a flexible approach to coaching rather than having one rigid philosophy.

Whether that involves small ball, hit-and-run tactics or the employ of power hitters, he’s willing to adapt to the personnel available.

But Watts insists that there are more important lessons for his players to learn.

“I just want to teach them how to respect the game and respect their opponents,” Watts said.

“Coach Beverly has already done a great job with that, so I’m just going to go along with what he’s been doing. We’ll have to wait until the spring to see what kind of team we’ve got and see who’s coming back, and we’ll go from there.”

Annah Little held firm at the mound to give the Luna Chicks a close 8-7 victory over Tana Strong. Dixie... read more