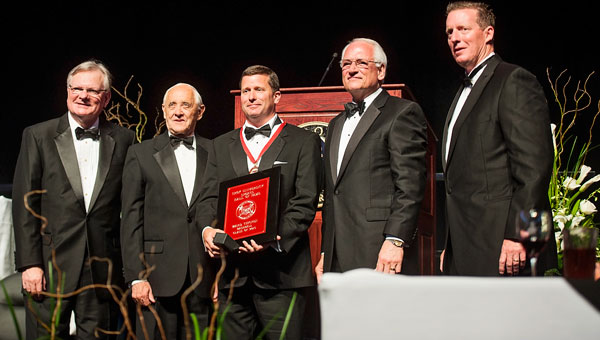 Butler County native Ward Thigpen (middle) was named as one of eight inductees into the fourth Troy University Sports Hall of Fame class.

Butler County native Ward Thigpen graced the halls of Troy University once again, though in a very different capacity Saturday evening as one of eight inductees into the fourth Troy University Sports Hall of Fame.

“On behalf of all of our student-athletes and our administration, I want to congratulate these eight very deserving inductees,” Troy Director of Athletics John Hartwell said.

“I also want to thank the Hall of Fame Committee, along with the many Trojans who have a hand in making this event so successful.”

Thigpen was responsible for one of the best seasons in Troy baseball history with an 11-1 record under coach Chase Riddle and a 2.12 ERA on the way toward recognition as Gulf South Pitcher of the Year and First Team All-America honors.

He also set the single-game records with 17 strikeouts in a game and by retiring 19 consecutive batters.

It isn’t Thigpen’s first time finding himself in a hall of fame, however, as he was inducted into the Troy Baseball Hall of Fame more than a decade ago.

But being a part of the 2015 class among athletes from all programs is a distinct honor all its own, though it doesn’t diminish his first induction.

“For me, both of them were such an honor,” Thigpen added.

“Troy’s got a great baseball history, so to be considered a standout in that group of company really was a shock.  And obviously now, to be considered throughout all athletics, I can’t really put it into words.  It’s just a tremendous honor.”

Thigpen and the Trojans went 49-10 during the 1990 season and won a Gulf South Conference championship during his first season with the team in 1989, and he currently sits at the sixth all-time pitcher in Troy history with three recorded shutouts.

The hall itself can be found in the main rotunda of Trojan Arena.