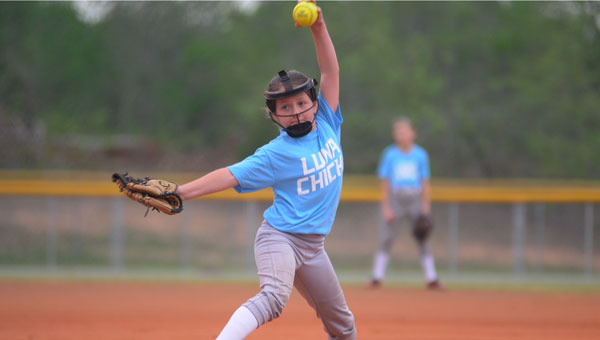 Annah Little held firm at the mound to give the Luna Chicks a close 8-7 victory over Tana Strong.

Carley Boutwell, Angel Ocean, and Skylar Bates each found success at the plate with hits that brought in some much-needed runs for Tana Strong.

But a combined effort from Annah Parker Little and Emily Bowen—and four runs scored between the two—propelled the Luna Chicks ahead slightly for a narrow 8-7 lead.

Boutwell and Ocean each ended with a run scored apiece, and Julianna Breau added two runs scored for Tana Strong.

Annah Parker Little and Abby Sexton recorded one hit each for the Luna Chicks.

The White Sox proved to be a team unit as all four of the team’s runs came from four different sources.

Brody Cartwright, Demarcus Smith, Lane Carter and Tydarrious Simmons each scored a run to give the White Sox a slight 4-3 edge over their opponents, the Rockies.

Cartwright in particular had a number of successes at the plate, recording three hits on the afternoon.

The Rockies enjoyed similar success at the plate, with Laquan Robinson connecting twice and Damien Mount, Turner Patterson and Marterrious Davidson nabbing one hit each, but it wasn’t enough to turn the tide.

Rondarious Rhodes, Jarvis Boggan and Channing Beverly put on a scoring clinic and accounted for half of the Red Sox’s runs, each scoring two runs apiece.

Rhodes sent one over the fences for a homerun that sustained the Red Sox’s momentum for the remainder of the game.

Nate Richardson and Luke Stinson each scored one run and had one hit apiece for the Braves.

Lukevion McCall had one hit for the Braves, and Austin Cabrera had two hits.

Clay Whiddon and Garret Follington were automatic at the plate, as the two led the Giants to a runaway 10-2 victory with two hits each and two runs scored.

Cade McNaughton found similar success with two hits and one run scored, as well as a run scored from Owen McNeal.

Everything went the Marlins’ way Monday as Matthew Pipkin, Lucas Elliott and Clay Benson combined for nine total runs to give the Marlins a commanding 19-4 victory over the Braves.

Sawyer Waddell also connected three times at the plate with two runs scored for the Marlins.

Cade Lakes attempted to rally the Braves with two hits at the plate, but the gulf was too wide to overcome.

Lakes, Ayden Alexander, Landon McClain and Austin Johnson each recorded one run scored for the Braves.

Homeruns were a dime a dozen for Pretty Tough as both Marli Campbell and Ta’Jaylen Smith recorded homers that propelled their team to a runaway 18-3 win over their competition, the Dirt Angels.

Lexi Reaves, Alyssa Johnson and Mariah Harris each posted three hits apiece at the plate to give Pretty Tough even more momentum.

Presley Hamilton, Kayleigh Bolding and Justice James scored one run each, and Georgia Lowe chipped in for the Dirt Angels with a big hit at the plate.

An Emily Cauthen homerun paved the way for a Free Agents win over the Dirt Angels.

But Bailey Lambert answered with a homer of her own for the Dirt Angels, spurring on her teammates Justice James, Kenadie Mount and Katelyn Oliver with hits of their own.

Georgia Lowe led the Dirt Angels with three hits at the plate and one run scored, but the Free Agents held firm with a three-run lead.