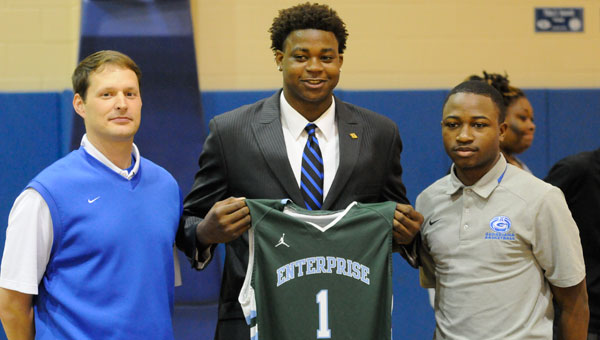 Family, friends and coaches all looked on as Georgiana senior Jeremy Sims signed a letter of intent to play basketball for Enterprise State Community College on Thursday. Sims averaged 10.2 points, 7.8 rebounds and 2 blocks per game for the Panthers in the 2014-15 season.

But for Sims, the letter he signed was more than a ticket to his future—it was the culmination of hard work throughout the previous two years.

Georgiana head basketball coach Kirk Norris said that Sims made the best of a second-chance opportunity, not unlike his performance beneath the rim all season long.

“He played in the seventh grade, and then he didn’t play again until he was a junior,” Norris said.

“He had some maturity issues, but he grew up a lot and going into his junior year, we had a talk and he talked to some of the other guys that had been playing.

“I told him that if he could do what was right, I’d give him the opportunity.  And he’s made the most of it.”

Norris added that the 6-foot-6-inch center improved tremendously between his junior and senior year, both on and off the court.

“He got out here and he worked hard every day,” Norris added.

“He was serious about basketball, and he came out here every day and he worked to get better.  He was very coachable, and he didn’t mind working hard.

“You put that with his frame and his athletic ability, and it’s a good combination.  And I think he’ll get even better.”

“I’m losing a lot of post players this year who are graduating and going to play on at the next level, so I needed some size,” Williams said.

“When he came in and was able to rebound over my guys like he did, that led me toward thinking ‘I really need this kid.’ He can step out and shoot a mid-range shot, and he can hit the three-point shot, and that’s going to be very effective for us and the offense that we run.”

Williams has already built an itinerary for Sims during the summer, which include plans to develop more moves in the post as well as gaining 10 to 15 pounds in the offseason.

“We’ve got a lot of work to do—we start this summer and he’s coming to summer school, so we’re getting right on it,” Williams added.

“Jeremy will be a big asset to our program next year.”

Sims himself didn’t say much during the conference, noting that his nerves got the better of him.

But he had a clear inspiration for succeeding.

“Motivation kept me going.  It was trying to get a higher education,” Sims said.

He’s also keenly aware that he has several challenges facing him between now and summer, but he’s eagerly looking forward to meeting them the same way he has for the past two years.

“It was a lot of work for me in just those two years, but I know I’ve got to step it up a lot more.”