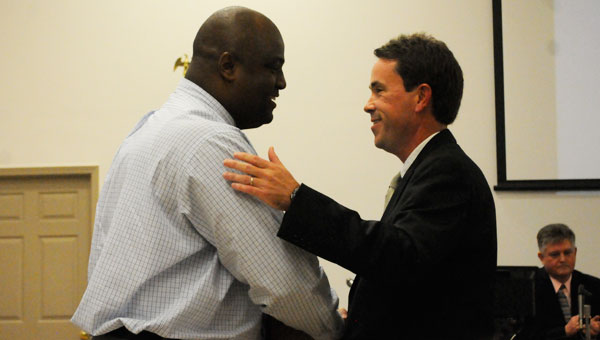 There’s a new face at the helm of  Greenville High School football, and it is a familiar one for Camellia City residents.

McLendon returns to Greenville from McKenzie School, where he served as head football coach and led the Tigers to back-to-back second-round playoff appearances.

McLendon previously served as an assistant coach at Greenville High School for three years before transferring to McKenzie, and he said that the return to Greenville has been a dream come true.

“I’ve grown up here.  This place is very special to me.  It’s just something that I’ve always wanted to do,” McLendon said.

“It’s been a dream of mine for a long time, and I’m very honored that Mr. Dean would give me this opportunity.  To the players, I look forward to coaching you guys and I look forward to working hard and getting in and doing what we’ve got to do to be successful.”

But before thanking God, his family and close friends, McLendon gave the biggest thanks to the place he has called home for the past two years.

“Something that has been really important to me over the last two years was my McKenzie family,” McLendon added.

“I feel like I’m always going to be a part of McKenzie.  I spent two special years down there and really special people came in contact with me.  Mr. Gunter, thank you for giving me the opportunity.

“I just want to tell you guys how much you mean to me and how appreciative I am of what you did for me and how you just welcomed me into the community there in McKenzie.”

Greenville principal Joseph Dean said that McLendon being a product of Greenville was one of the biggest factors in the decision.

Butler County Board of Education member Michael Nimmer expressed pleasure about the decision, giving his own firsthand account of McLendon’s influence.

“He’s a very good coach—all of you can see his record to know how good of a coach he is,” Nimmer said.

“But I just want you to know that if you haven’t been around him, he has a great moral influence on those kids that he coaches and that he trains.  And I can’t tell you the gratitude that I have as a parent for the influences he’s had on my son.”

McLendon said that the team is currently in the evaluation phase in terms of plans for spring training and finalizing a coaching staff, though a team meeting would serve to determine a focus moving forward.

“We’re going to evaluate everybody and look and see what we’ve got. Hopefully, we can put the best staff together that we can,” McLendon said.

“We’re going to go out and be very aggressive with our staff, and hopefully hire some people that want to be here in Greenville that have some ties to Greenville and, more than anything, want to help these young men and women be the best that they can be.”