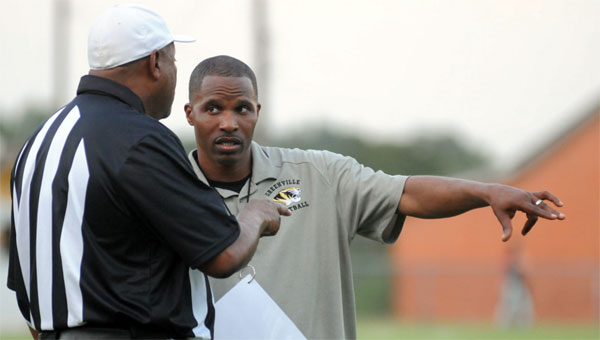 In the wake of former head football coach/athletic director Patrick Plott’s departure, Greenville High School have narrowed the vast pool of candidates to only seven, and hope to have a final recommendation for Butler County Schools Superintendent Amy Bryan by the week’s end.

The final deliberation process has begun among the committee members charged with selecting Greenville High School’s next head football coach and athletic director.

“We’re in the phase now where we’re trying to finalize the process, meaning we’re reviewing and having more discussions.  And then, if we can come up with a consensus, we’re going to present that recommendation to (Butler County Schools Superintendent) Mrs. Bryan.”

The committee has narrowed the pool to only seven remaining applicants, and the members are aiming to present a candidate to Bryan by the week’s end.

But before a decision can be reached, there are a number of considerations to make.

One of the topics of discussion among the members is the new coach’s salary, and whether it should be increased.

“We had an abundance of applicants, but we felt that we weren’t in the position to go out and pursue high school coaches that probably were more proven or decorated because of the salary,” Dean said.

Dean added that salary talk isn’t a priority, however, as the committee hasn’t even finalized its selection.

Moreover, the discussion to increase the salary for the position at Greenville High School is nothing new.

“That was a conversation that we’ve had for numerous years,” Dean added.

“Nothing against Georgiana and McKenzie, but every coach makes the exact same salary, and we just felt like it would be more attractive and honestly justified.

“You’re dealing with more student athletes in every sport, such that this position should warrant a higher pay.  It had nothing to do with the search.  The only connection was we just happen to be looking for a new coach, but we’ve always had the feeling that this position should pay more than Georgiana and McKenzie simply because of the nature of the job and everything that it involves.”

Dean has experienced a range of emotions during the search, but he said that one emotion stands out among all of the rest—frustration.

“To be here doing this a year later, having just done it, is frustrating,” Dean said.

“We had a great year this past season, and we’re looking forward to a lot of players returning.  The kids are still excited about it, and it’s carried over into the school.  So now to be back here looking for a leader not only in football, but in the total athletic department, is frustrating.”

But the frustration doesn’t stem from any personal grievances, he added.

“What makes it frustrating is this:  this is going to be the third coach that our senior football players have had,” Dean said.

“It’s not about me.  It’s not about anything else but about those kids, and we have to be mindful of it. I think before we can start trying to critique and scrutinize who the next coach will or won’t be, we’ve got to find a solution to why we keep finding ourselves in this situation.”