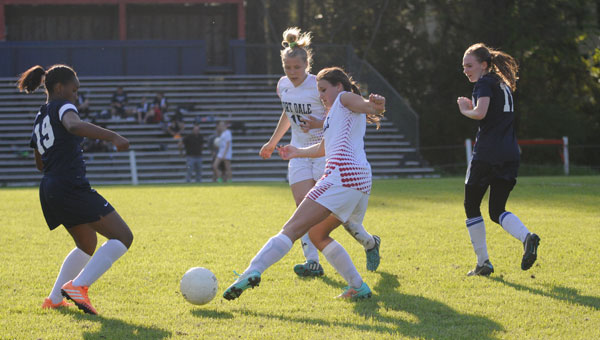 A sturdy defense kept the Tuscaloosa Academy Lady Knights at bay on the soccer field of battle Monday as the Fort Dale Academy Lady Eagles claimed a 2-0 victory.

With the win, the Lady Eagles also clinch the region and a No. 1 seed for the third consecutive year.

FDA head soccer coach Josh Wildermuth said that the team’s positive energy has been the key to victory this season.

“Our girls have just had an extreme focus this year, and they have gone out and given everything they had every game,” Wildermuth said.

A successful penalty kick from Jessica Little and a finish from Lauren Gibson in front of the goal gave the Lady Eagles their first two goals of the half, but it turns out that’s all Fort Dale would need.

FDA switched gears to manage a threatening Tuscaloosa Academy offense in the second half, and the adjustment paid off.

“They had lots of speed in the front line, but we continued to play our game,” Wildermuth said.

“But we made some adjustments with the defense to lessen their attack.”

The Lady Eagles enter the playoff fray without one of its captains and team leaders, Callie Waite, who underwent a surgical procedure that kept her off the soccer pitch.

But as good captains often do, her absence has inspired the Lady Eagles just as much as her presence.

“Our team has rallied around the concept that we want to accomplish great feats for her and prove that we are the team to beat,” Wildermuth added.

“When we are not playing well, the girls talk about how Callie would be getting onto them and that they have to show up for the second half.

“We knew our team would be special this year, but the situation has elevated things to new levels.”

The Lady Eagles find their final regular season opponent in Macon East today. The match will be played in Cecil.  Since the Lady Eagles have clinched the region, the game is more of an opportunity to have fun and polish some skills in preparation of the first round of the playoffs next week.

A date and time have yet to be determined as of press time.