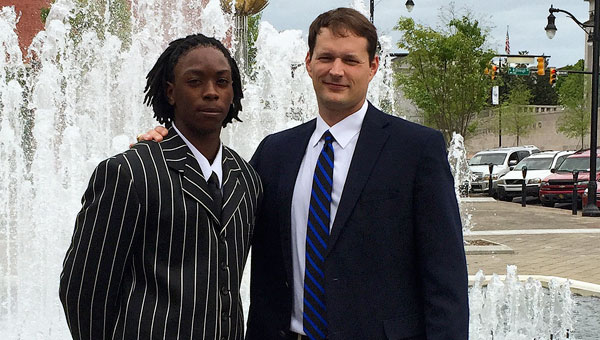 Georgiana’s Richard Boggan was recently named a finalist for the Alabama Sports Writers Association Class 1A Player of the Year and attended the organization’s banquet in Montgomery.

Boggan is the first Georgiana athlete to be recognized as a state finalist for the award.

Boggan said that being surrounded by so many talented athletes from around the state was a hallmark moment in his athletic career thus far.

“It was very big for me. When I heard that I was in the running for Player of the Year, I was very surprised,” Boggan said.

“With all of the guys that play basketball around Alabama in 1A, by me being from the small town of Georgiana, I wouldn’t think that I would be up there in the top three.

It was a big accomplishment.”

2014 was a year full of accomplishments for Boggan.

Twenty-nine of them came back-to-back.

But his prowess on the hardwood wasn’t the only subject of admiration for Boggan Thursday, as his Al Capone-themed gangster attire earned him a spot on al.com’s best dressed list at the banquet.

“My mom was like ‘Why don’t you just put on a shirt and tie and some khakis?’ Boggan said.

“But see, it was a big thing for me, so I wanted to dress for it.  I pulled out a little pinstripe suit, and I got my sister to do my hair.”

Being considered a finalist—and as a result, one of the top three players in 1A across the state—was an even bigger accomplishment considering Boggan still has one year remaining.

The small-town spirit that allowed Boggan, and Georgiana as a whole, to stun no small shortage of opponents is the same spirit that will have opponents looking at the Panthers under a different lens next season.

“When they heard about how many double-doubles I had, people were astonished when they saw how short I was.  It kind of surprised a bunch of people,” Boggan added.

“It might make them think twice about Georgiana, although we lost to A.L. Johnson.  They might think about how strong we’ll come back.”

Though Boggan didn’t take home the 1A Player of the Year award, he didn’t leave the banquet disappointed.  On the contrary, it had the opposite effect.

“I told my mom that it was alright that I didn’t win,” Boggan said.

“I was one of the top three from among all of the 1A people playing basketball, so I felt like I accomplished something by being there.”