Panthers fall to Goshen and Park Crossing in weekend tourney 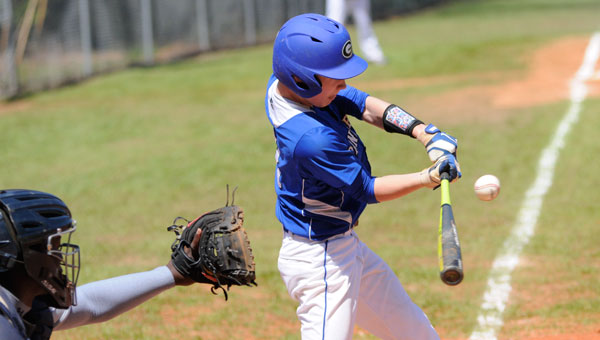 Georgiana’s round-robin tournament against Goshen and Park Crossing resulted in two losses Saturday afternoon, but the Panthers walked away with a victory of a different sort.

The weekend faceoff against larger teams earned the Panthers a pair of 12-2 losses, but head baseball coach Ken Hamilton said that the fires of battle will forge a better Panthers team—particularly among his younger players.

“And so I tell our guys that doesn’t mean we can’t compete with the Goshens and the Park Crossings and teams of that nature.  But it’s just really about my young guys experiencing those types of games and competitive situations so that down the road, they’re not intimidated.”

For four innings with the Park Crossing Thunderbirds, intimidation was the furthest thing from the Panthers’ minds.

Though ace pitcher Matt Sheffield got off to a slow start, the Panthers’ defense settled shortly after allowing an early pair of runs in the very first inning.

The Panthers struggled to mount an early response to the Thunderbirds, thanks to a streak of strikeouts that kept Georgiana off bases for a duration of the game.

Unfortunately for the Panthers, the deficit wouldn’t remain narrow for long.

“We were in it 3-1, and we just had an error here, and a dropped pop-up in the infield there, and that snowball effect came on,” Hamilton said.

“And so we just had a few guys make a couple of mistakes that led to some runs. When it was 3-1, we were all high in spirits.  Then, all of a sudden, they put up a few runs and it was like someone let the air out of the balloon.”

The Panthers’ hard luck this past weekend was buoyed by several standout performances from underclassmen, including eighth graders Jackson Edwards and Chase Black as well as ninth grader Detavious Likely.

In fact, the younger Panthers have been integral to every victory but one on the season against larger teams, including a win over 5A opponent Wilcox.

“All of those guys have gotten so much better from last year,” Hamilton added.

Despite the stumbles along the way, Hamilton remains confident that his team can make the playoffs with two game following spring break against J.U. Blacksher Tuesday and Ellwood Christian the following Friday and Saturday.

“That’s been our goal all along this season,” Hamilton said.

“We’ve had about 10 games that have been rained out, so I wish that we would’ve had time to play those to get a little more experience. But at this point in the season, I think that we’re a playoff team.”

The Georgiana Panthers baseball team has enjoyed growing community support in recent years, but a number of parents are now... read more