Eagles rebound with win over Lakeside 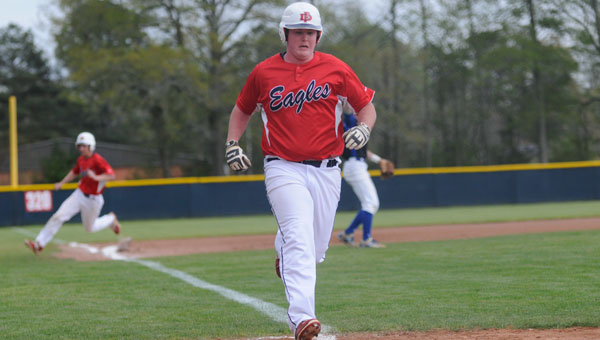 Evan Thomas sprints for home on a second-inning double for the Eagles’ first run.

A double dose of misfortune came back to back for the Fort Dale Academy Eagles Friday with a crushing region loss to Pike Liberal Arts and a second loss to one of the toughest teams in the state.

But the Eagles found their wings again Saturday afternoon against the Lakeside School Chiefs with a 7-4 victory.

“I pretty much challenged them after the game to come out Saturday and try to get better,” said head baseball coach Josh Beverly.

“I thought we came out with a better attitude after the second game.  It always sucks to lose a region game the way we did and then play one of the best teams in the state after that; it would be tough for anybody to do that.”

“But I was proud of the way we came out.  We were up, and then we were down, and we hung in there and won a game against a pretty decent team.”

The Chiefs proved more than up for the challenge at the top of the afternoon, closing the first inning emphatically with a rare triple play.

Unfazed by the defensive feat, Evan Thomas sent a double nearly to the fences in the bottom of the second inning to set the pace for the Fort Dale offense.

A single brought two home for an early 2-0 lead for the Eagles.

Lakeside found a response in a homerun courtesy of Drew Spivey, which earned the Chiefs three runs and the lead.

A two-run double from Thomas would even the odds at four runs apiece in the bottom of the fifth, and a single from Tanner Cartwright regained the Fort Dale lead 5-4.

Austin Vickery poured it on with a triple that grew the lead to 6-4, and a fielder’s choice from Burkett tacked on the seventh and final run.

Though the non-region win doesn’t improve the Eagles’ playoff standing, the win was still massively important to momentum.

“The games in between region games are where you can get on a little bit of a roll and start to believe in yourself a little more,” Beverly said.

“We had a rough stretch for about a week and a half or two weeks, and I was starting to question a lot of things.  but defensively, we’ve shored things up a bit and we’ve got four guys that are pretty good on the mound, so it gives us a chance to win.  We’ve just got to find a way to score runs right now and not leave people on base.”

Following a Tuesday double header with Monroe, the playoff picture will look much clearer for Fort Dale.

Despite the team’s lack of success in region play, Beverly remains confident that the Eagles are in great shape for a playoff run.

“We still control our own destiny,” Beverly said.

“We’ve just got to find a way to get in the playoffs, and then we’ve got pretty good pitching for a three-game series.”