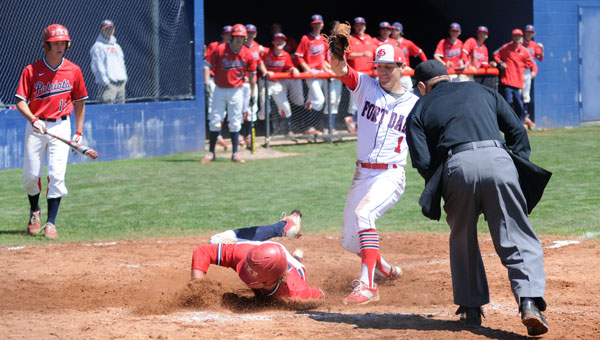 A diving effort for home plate served as the beginning of the Pike Liberal Arts Patriots’ fortune as a massive swing in momentum culminated in eight unanswered runs, topping the Fort Dale Academy Eagles 8-4. Below: The Patriots’ dugout was the liveliest audience Friday afternoon as members cheered on their teammates in the final innings of play.

The Fort Dale Academy Eagles sat comfortably in the driver’s seat of their Friday afternoon regional rivalry with the Pike Liberal Arts Patriots for five innings. But the ship soon began to sink as a flood of Pike hits in the final two innings changed the tide with eight unanswered runs, leading the Patriots to an 8-4 victory.

But the first several innings were all Fort Dale, as third baseman Drake Cabe set the pace for the Eagles with a double to center field, followed by a single from pitcher Ryan Burkett.

Cabe followed up by stealing home with a lunging dive after an errant fastball at the plate for the Eagles’ first run of the afternoon.

Aaron Thomas ended the second inning with an exclamation point and sent two more Eagles home with a booming hit to center field for a 3-0 Fort Dale lead.

Pike pitcher Tucker Johnson responded with a double of his own at the top of the third in an effort to build steam for the Patriots.

A lightning-fast pickoff from Burkett cut the momentum short, earning an out and sending Johnson to the dugout in the process.

Fort Dale kept the momentum going after an error at third base paved the way for Kenny Harden’s path to first base.

Harden continued and made his way home following a double, extending the Fort Dale lead 4-0.

A leadoff homerun at the top of the fourth from Drew Starling injected life into a struggling Pike Liberal Arts offense to give the Patriots their first run.

Johnson similarly snuck home for a second run before Burkett stopped the bleeding with a decisive strikeout to end the top of the fourth inning.

The Patriots’ defense began to find its rhythm in the bottom of the fourth, however, as a double play cut the brief inning short, fired up the Pike dugout and, most of all, swung momentum in their favor permanently.

An attempted pickoff from Burkett sent a Patriot from first to third, and a follow-up single to right field narrowed the Fort Dale lead even further as the Patriots earned a third run.

A bevy of hits to right field resulted in more Patriots runs that gave Pike its first lead of the game at 5-4, but an excellent catch and toss to first from Cabe ended the inning as the Patriots threatened to take the lead.

The Eagles’ offensive woes continued at the bottom of the sixth as a pop-fly from Vickery and a pair of strikeouts from Starling, who entered the game as a relief pitcher, quickly ended the sixth.

The Patriots’ final inning at bat began with a case of déjà vu as an attempted pickoff at first base allowed Rush Hixon to make it to third.

A single from Starling sent another Patriot home for a 6-4 lead, and a near-perfect line drive sent two more home for Pike’s final two runs.

The Eagles entered the bottom of the seventh with a four-run deficit to surmount, but pitch-perfect throws from Starling kept the Eagles out of play.

The Eagles ended with four runs on seven hits, one error and 12 men left on base.