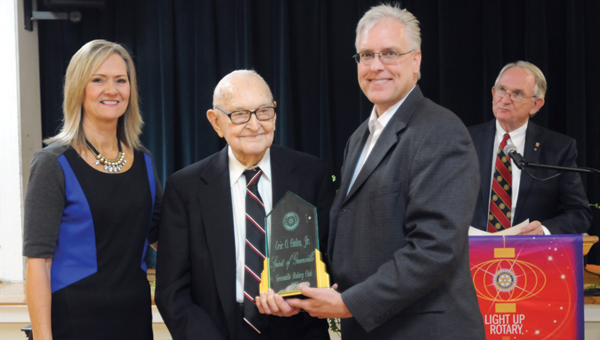 Col. Eric O. Cates, Jr., center, was presented with the Spirit of Greenville Award by the Rotary Club of Greenville Thursday night during the club’s annual awards banquet, which was held in the fellowship hall of First United Methodist Church. Cates was presented the award by club President David Norrell and District Governor Carol Franks. (Advocate Staff/Andy Brown)

Eric O. Cates, Jr. grew up and still lives in the Searcy Community.

But he’s close enough that he still considers Greenville home.

On Thursday night, a large group of Greenville residents filled the fellowship hall at First United Methodist Church to claim Cates, as he was awarded the Spirit of Greenville Award by the Greenville Rotary Club.

The Spirit of Greenville Award is the highest recognition given by the club to a non-Rotarian. It recognizes those who practice service above self, demonstrate the utmost integrity and are actively involved in the life of the community.

The club has presented the award since 2007.

“This is really close to my heart,” Cates said. “Recognition you get at home is a lot better than that you get at other places.”

“To know him is to love him,” Krudop said. “He has a big heart, generous pockets, and he loves his country, state, community, church and especially his family.”

Cates, a combat veteran of both World War II and Korea, is a retired Army colonel, with more than 35 years of service in both the Army and the Alabama National Guard.

He is an active member of American Legion Post No. 24.

Cates has served as a member of the Greenville Kiwanis Club, the board of trustees for Greenville High School and the Butler County United Way Campaigns, and as the representative of District 84 in the Alabama House of Representatives.

He’s also active in the Fort Deposit United Methodist Church, where he has served as chairman of the board, a lay speaker and taught Sunday School for more than 50 years.

Earlier this year, Cates, also past president of the Butler County Cattlemen’s Association, was inducted into the Alabama State Agriculture Hall of Honor.

“I met Col. Cates when I moved to Greenville in 2001,” said Howard Meadows, president-elect of the Rotary Club of Greenville. “He’s certainly been one of my heroes ever since.”

Club President David Norrell said that Cates’ influence can be felt throughout the Butler County community.

“Col. Cates is very special,” he said. “I want to thank him for setting a strong example for so many people in our community.”

Along with the Spirit of Greenville Award, the club also gave Cates the distinction of being a Paul Harris Fellow.

A Paul Harris Fellow is an individual who meets high professional and personal standards set forth by Paul Harris, founder of Rotary.

Angie Coon was also recognized as a Paul Harris Fellow at the awards banquet, and Donny Rentfro, Casey Rogers, Chae Brown, Tori Jones, Pete Coon and Mack Lee were inducted into the club.

New bill to allow for creation of charter schools

Gov. Robert Bentley signs a bill to allow charter schools in Alabama. Prior to the bill being signed into law,... read more