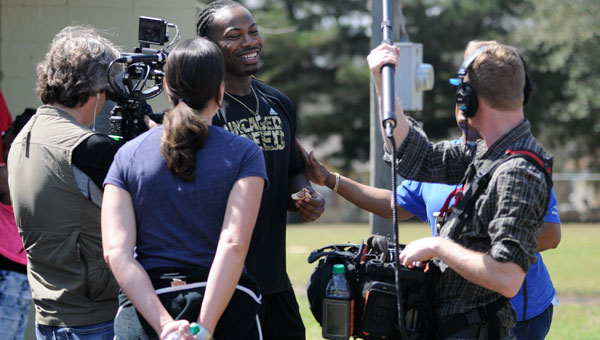 The basketball courts of  Garfield Park, commonly referred to as The Hill, was a common hangout spot for Greenville native and NFL prospect Za’Darius Smith.

So when Smith revisited his old haunt with a camera crew in tow—all ESPN employees for the documentary series “30 for 30”—seeing a sea of familiar faces was a great feeling.

“It felt great, just to know that I got support from my hometown,” Smith said.

“I hadn’t been home in the last five months.  I’ve been preparing for the NFL draft.  I’ve been to Houston.  I’ve also been in Tampa and Mobile to play in the Senior Bowl.  I’ve just been around traveling.  So to be back home and see everybody and let them pat me on the back is a great feeling.”

The courts of Garfield Park are where Smith honed his basketball skills to a razor’s edge, though his destiny would take an unexpected turn his senior year when he realized that his size wasn’t ideal for the role he fit on the court.

“So I made the decision to go back to my hometown of Greenville and talk to the football coach, Coach Ben Blackmon, and I told him that I wanted to play,” Smith said. “He told me ‘it’s not up to me; I’ll leave it up to the seniors.’

“And I really appreciate the seniors of that team. If those guys had said no, I wouldn’t be here today. They could’ve just said no, and I wouldn’t be the guy I was today.  I’d probably be somewhere still trying to play basketball.”

The University of Kentucky would likely owe thanks to those seniors as well, as Smith proved a dominating force on the Wildcats’ defensive line.

But for Smith, the feeling is mutual.

“Kentucky really did a lot for me,” he said.

“I made a name for myself.  I got a degree.  And I’m also getting a chance to enter this NFL draft.”

From a rookie senior superstar to a SEC titan awaiting draft day, Smith has seen his share of successes in just a few short years.  At Saturday afternoon’s gathering, the defensive end was swarmed by mobs of local children, each bearing a request to sign his or her T-shirt.

But he feels no sense of pressure despite the weight of expectations from those in the community.

The hard work was most evident in the Tampa-hosted East-West Shrine Game, where he was crowned defensive most valuable player.

“I started off hot early,” Smith said with a degree of pride.

“I told myself that I would go out there and make a name for myself.  Not everybody knows Za’Darius Smith right now.”

The game was also an opportunity for Smith to silence naysayers.

“A lot of people say they overlooked me because I had another defensive end playing beside me, but I know I’ve got my chance and I went out there and proved myself.”

In the days leading up to the draft, Smith has been in talks with a number of professional teams.  Though he isn’t sure where he’ll end up, he’s confident that he’ll place highly in the draft.

“On the way home, I had a call from the Dallas Cowboys; they actually want to work me out on March 23,” Smith said.

“I really think at the defensive end position, I’ll be a great pick in either the second or third round.”