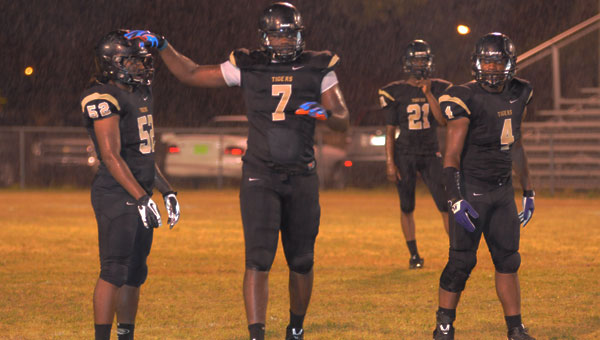 The No. 1 defensive end in the country is set to make a return to the Greenville Tigers’ sideline this fall.

Junior Marlon Davidson has returned to the Camellia City from George Washington Carver High School, though an unfortunate catalyst triggered the auspicious occasion.

Davidson’s mother, Cynthia Carter, passed away on Feb. 23 after suffering a head injury.

“The main reason why I left Carver was because my next legal guardian didn’t want me to stay up there without any family being around,” Davidson said.

“So with the lack of family, she told me I couldn’t be at Carver any more.  And she insisted on me moving back to Greenville.”

Davidson added that he was hesitant at first about the move because things had just begun to click for him at Carver.

Despite his initial hesitation, he added that there is “no doubt” that he’s excited to be back in Greenville.

“I wanted to come back and help my old school,” he said.

The move from Greenville to Carver was not an easy adjustment, Davidson said.

“And then your classes are more intense.  And especially on Friday nights—the level of competition rose and it was so hard for me, and I had to adjust.

“But when I adjusted, everything else came into my play.  And so I was just out there having fun.”

Davidson believes his experiences in Carver will certainly help in the coming season.

“It really can help me have a breakout season my senior year.  Playing on that level, it was hard.  Then coming back down to 5A football, I think I’ll dominate it, no doubt.”

But the offseason is perhaps the most important opportunity for the 6-foot-4, 268-pound five-star prospect.

Davidson currently holds the top-ranked spot among athletes in Alabama, and ranks second on a national level, according to Rivals.com statistics.

He’s currently looking at a laundry list of potential colleges from around the nation, including local SEC teams Auburn, Alabama, LSU, Georgia, Mississippi State and Ole Miss, as well as Oregon.

Davidson said that he wants to play college football as early as possible.  To that end, maintaining his strength, conditioning and stability is key.

“The weight room to me has to get serious—even more serious than it was then,” Davidson said.

“I won’t lie—I played around my sophomore and freshman year.  But my junior year, I dominated.  Now, I’m at the level that I need to be at to keep going so that when I do get to college, I won’t be behind.”

As far as options for college go, he’s weighing every single one of them.

“I’d wait all the way to signing day, if I could,” Davidson added.

“I’m just waiting for the team to give me the best offer, see what I can do for their team, and see where I would best fit in.  And see if that school makes me comfortable.  That’s what I’m looking at.”