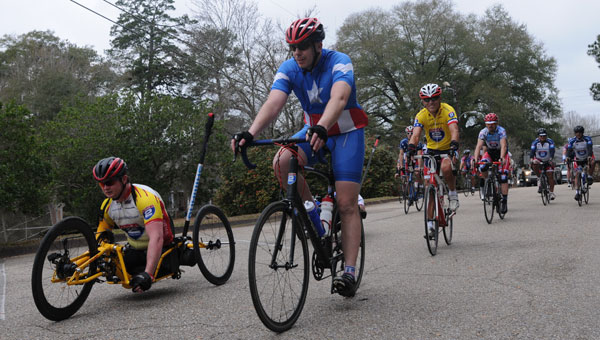 More than 100 injured and disabled veteran cyclists poured into the Camellia City Monday on their way to New Orleans during the 470-mile Ride 2 Recovery event.

The Camellia City served as a checkpoint of sorts for more than 100 injured veteran cyclists on bikes of all shapes, sizes and colors for the 2015 Ride 2 Recovery campaign.

The veterans made their way through the city Tuesday as a part of the Ride 2 Recovery Gulf Coast Challenge, which is a six-day, 470-mile bike ride from Atlanta to New Orleans.

The organization is an effort to improve the health and wellness of healing heroes around the world, all while provided a life-changing experience that pushes participants to their physical and mental limits.

One such participant is Michael Lage from San Antonio, who still serves as an active duty member of the Army.

Lage has gone on three tours, the last of which concluded in 2007.

The experience left Lage with an amputated left hand and right thumb, burns that once covered 39 percent of his entire body, a neck fracture, a lost spleen and an elbow fusion that prevents him from straightening his left arm.

After an extensive recovery, Lage saw fit to gear up for the Ride 2 Recovery challenge in 2013 and hasn’t looked back since.

“Not only does it give me exercise, but it also gets me back into the community, Lage said.

“It helps me work with other soldiers that are injured, as well.”

Lage recently made the transition between two specialized bike models but, when asked about which part of the challenge had been most difficult thus far, there was no hesitation in his response.

“This is my first challenge on an upright [bike], so the whole thing has been challenging.  But it’s a great experience.

“I used to ride a recumbent, which is a three-wheeled bike—two wheels in the front, and one in the back—you still pedal with your feet, but you’re in a more reclined position.”

Lage’s tackled his first challenge back in 2013 in his home state of Texas, and this year’s challenge marks his first ride since.

Though the Ride 2 Recovery program is an excellent means of bringing public awareness to veterans with disabilities in need of assistance, Lage has enjoyed a smaller, more personal benefit—tackling the same challenge, and overcoming it, with much more resistance.

“I’m mostly looking forward to the finish and being able to complete a multi-day, long-distance ride on an upright.”

Visit ride2recovery.com to find out how to show support to the nation’s veterans.