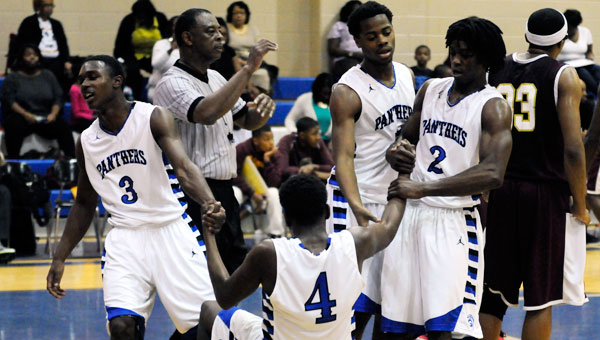 Jacquez Payton (left) and Richard Boggan (right) aim to inspire their fellow players as leaders during their senior year.

Two standouts on the Georgiana Panthers varsity basketball team proved that you don’t need to be a senior to lead by example.

Juniors Jacquez Payton and Richard Boggan managed to stand out on a team already full of exemplary athletes with a pair of impressive career milestones.

Payton also managed to hit the 1,000-point scoring milestone of his career during the season despite missing 11 games due to a back injury.

“I worked out a lot when I was hurt.  I’m a scorer, and it’s pretty much the only thing I can do.”

Narrowing down his biggest asset was easy.

“Driving.  I like attacking the basket.  We run a face-paced offense and I just like running the floor.”

Boggan, a six-foot-one-inch starting forward for the Panthers, averaged 18.8 points and 15.8 rebounds per game.

It’s not uncommon to see Boggan play with a height disadvantage against opponents, but it’s something that he’s worked to rise above—literally.

“Me and my mom are always talking, and with me being so short, I didn’t think I would get that many rebounds over tall people until I put it in my mindset that can’t nobody in 1A out-rebound me,” Boggan said.

“And if a ball goes off the rim, it’s mine—nobody else’s but mine.”

Boggan’s patented mind-over-matter technique is almost guaranteed, but there’s more to it than just mental acuity.

“It’s hard work through the summer, and lifting weights, and squatting and all of that.  I would say it’s hard work and talent put together.”

Speaking of the off-season, Payton added that it was thanks to the weight room that the team enjoyed the success it had throughout the 2014-2015 season until the crushing loss to A.L. Johnson in the region championship game.

But it was Boggan who received the most thanks.

“We worked hard to get where we got,” Payton added.

“Richard led us while I was out.  He played good.  Our defense was good until we got to the game we lost—we gave up a lot of offensive rebounds.  But overall, we did alright.”

Boggan said the road to a championship began well before the start of the 2014 season.

He came to Payton his 10th grade year and asked him what it would feel like to win a state title their junior year instead of waiting for a senior run.

When Payton responded favorably, the two began to get their entire team on the same page.

“And as we started progressing through the games, the players started stepping up,” Boggan said.

“If I had a bad game, we had another power forward who would step up.”

Payton agreed, adding that no one person was responsible for the team’s biggest strength.

“We aren’t selfish. That’s what really got us there,” Payton said.

Seeing Boggan and Payton console each other following the team’s narrow defeat at the hands of A.L. Johnson was a depressing sight for Georgiana fans.

It was a brief glimpse at the familial bond between Boggan and Payton that has kept them—and the entire team at large—glued together in the toughest of moments.

“Me and Jacquez are cousins, and I told him I’m going to bust my behind to make sure that he gives his all on the court,” Boggan said.

“And we push each other.  Most people don’t see that bond that we have, but when he gets down, I try to lift him up.  And when I get down, he tries to lift me up. We have that family bond as we play on the court.”

Boggan added that Payton isn’t his only source of inspiration.

“When Coach Norris first came down here, I didn’t think anything about basketball, and I wasn’t really into it until I saw him,” Boggan said.

“I grew up playing football and baseball.  Coach inspired me because he kept pushing and pushing.  I like people who push me to do my best.

“Ever since then, he’s been coaching me, giving me good points and making sure I do my best in whatever I do.”

Payton added that next year, when he and Boggan are both seniors, they’ll be the ones that have to do some of the pushing.

“First of all, our seniors have got to be leaders,” Payton said.

“We’re going to only have three seniors—we may pick up one.  But we have to set an example for the guys coming up.  This summer, me and Richard are going to work hard.  Anytime we can hit the gym, we’re going to hit it, because we’ve got to go out with a bang.”