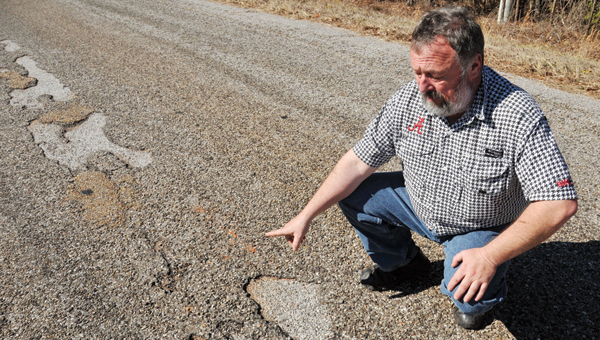 Butler County District 2 Commissioner Jesse McWilliams points to a plethora of patches on one of the county’s roads that is in need of repairs. Below: A stretch of county road is shown. | ADVOCATE STAFF / ANDREW GARNER

The Butler County Commissioner, who represents District 2, has been talking about this issue for some weeks, bending the ear of other commissioners and those who believe that the roads need to be repaired.

“All of the commissioners are searching for ways to improve our road system, and keep it going,” McWilliams said.

Most of the roads that need repair were built back in the 1950s when Jim Folsom was governor.

McWilliams said Folsom created a farm-to-market road system, and most have passed their age limit.

When asked how much money it’s going to take to fix the roads, McWilliams said it’s probably going to cost in the “neighborhood” of $140,000 per mile.

“Just for resurfacing,” he said. “If you have to add to extend your road a couple feet, where you have 11-foot lanes, that $140,000 jumps considerably.”

According to Butler County assistant engineer John Mark Davis, who also provided the mileage of the different types of roads in the county, construction costs have risen over the years.

“Currently, depending on the type of build-up you place, the roadway width and current roadway conditions, the average cost per mile varies from $110,000 to $244,000 per mile,” Davis said. “Roadway build-ups and widths are determined by average daily traffic counts and a percent truck traffic.”

Many of the roads that McWilliams is talking about have been patched over the years, but not resurfaced.

“This is an example right here,” McWilliams said as he was driving on County Road 41 North. “It’s drivable, but you can see where it’s been patched in different places.

“We’re running the speed limit on it. It’s bumpy in some places, but it’s still manageable now,” he said. “It’s not perfect at all, but it needs work done. Without some type of assistance, this road won’t hold up many more years.”

James Thomas, who lives in a neighborhood on County Road 41, said the roads do need repairing.

“We don’t get any state help or anything,” Thomas said. “If you ask the county (to fix them), they always don’t have any money.”

Jewel Tilley, who lives out on County Road 61, said the roads are “horrible.”

“Everybody on the road complains,” Tilley said. “They patch it, but it doesn’t hold.”

McWilliams said that the county doesn’t have the funds to fix the roads, adding that the county’s ATRIP funding is a separate funding project. ATRIP funds are only designated for federally defined roads and structures.

McWilliams, along with other commissioners propose to help pay to fix the roads is a reallocation of the taxes from the gasoline fund.

Federal gasoline taxes collected in the state go back to the federal government and then returns with restrictions for usage, McCall said.

McCall said there is a small percentage of the taxes that may be utilized on the minor collectors, but it’s understood that these funds are for major collectors.

Butler County receives approximately $533,000 per year, which must be matched with 20 percent local funds.

McCall added that this road issue isn’t a local or state problem, it’s part of a national trend.

McWilliams said that the reallocation of the gas tax is just an idea, but it’s a start.