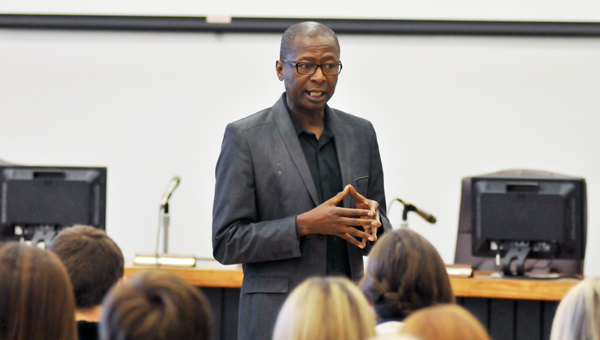 Students from McKenzie, Georgiana and Greenville attended the workshop at the central office’s board room.

Bowen, a Gordonsville native out of Lowndes County, is currently in his fifth season in the ASF’s rep company.

Bowen gave the well-attentive students, who came in groups, advice on writing and acting.

“Generally, it’s a playwriting workshop, but because I realized we had basically a theater and English group mixed in, and after talking with Dr. (Tera) Simmons, we decided to encompass it all,” Bowen said.

Bowen lives in Michigan, but is in Montgomery for the ASF’s production of “King Lear.” He will be playing the fool in the play.

When it came to the question-answer portion of the workshop, most of the students asked about writing techniques.

One student asked how she can write a group of words in a certain way.

Bowen said his best advice is to establish “back stories” for the characters and let them speak in a way that shows their background.

“Look at art and read poetry from (your character’s time period) and just write,” he said.

Bowen was also asked about wondering from the subject of the story or poem. He encouraged wondering.

“Don’t stop writing,” he said, adding later on that “writing is re-writing” and there aren’t any perfect writers.

“You can always make it better,” Bowen said. “Be satisfied in your dissatisfaction.”

Near the end of the workshop for the Georgiana and McKenzie students, Bowen talked about how in acting, one has to be disciplined.

“As actors, a lot of the responsibility is on you to hit the marks, say the lines and hit the cues,” he said.

One example he gave is from film acting.

Bowen said good actors will say a line that takes 45 seconds to film the same way because they are disciplined.

In real life, Bowen has been making a living as an actor since around 2001, but said he’s been doing it “forever.”

In total, Bowen has been working with the ASF for eight years, and will be in Montgomery for seven months to perform in “King Lear.”