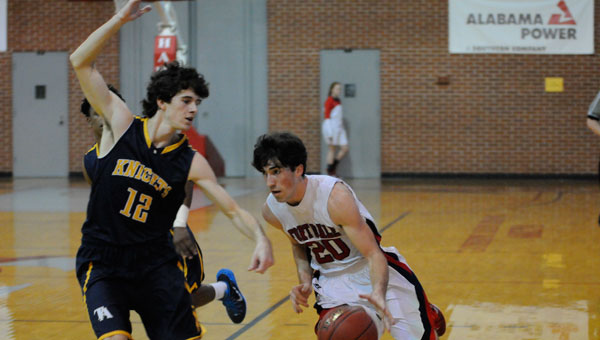 Austin Vickery brought energy and life to a struggling Fort Dale offense in the first half, but the Knights’ full-court press wore the Eagles down in the second half.

The Tuscaloosa Academy Knights wore the Fort Dale Academy Eagles down with a suffocating full-court press from the opening minutes of the first quarter.

Unfortunately for Fort Dale, it was a gambit that paid off as the Eagles fell to the Knights 46-33 in the first round of the AISA Elite Eight Basketball Tournament.

It was tough going offensively for the Eagles until Austin Vickery created his own opportunity with a steal, going coast to coast for a layup and a trip to the free throw line for a three-point play.

A signature three pointer from Ryan Burkett edged the Eagles even closer to the Knights’ early lead, and a buzzer-beater three from Vickery closed the quarter trailing only one point behind Tuscaloosa Academy.

The Knights’ defense gave no quarter in the second, as the Eagles struggled to get the ball inbounds, let alone out of their own half of the court.

Meanwhile, Keonte’ Chambers, Sam Brown, Harrison Standfeller and Terry Deboise relentlessly assaulted the rim while a tired Eagles defense was powerless to stop the inside drive.

Taylor Thomas offered the Eagles first breath of air with a three pointer that cut the lead to six in the third, but the momentum dissipated when the Knights’ full-court press caused a turnover and a quick potential three-point play.

The dagger came moments later with a three pointer from Tuscaloosa Academy point guard Josh Lanier that ended the third with an 11-point Knights lead.

The Eagles fought bravely despite the fatigue, but the press prevented Fort Dale from matching the Knights’ up-tempo pace.

Greenville’s Raheem Moore drives the court during the Tigers’ 83-30 win over Alabama Christian in the semifinals of the Class... read more