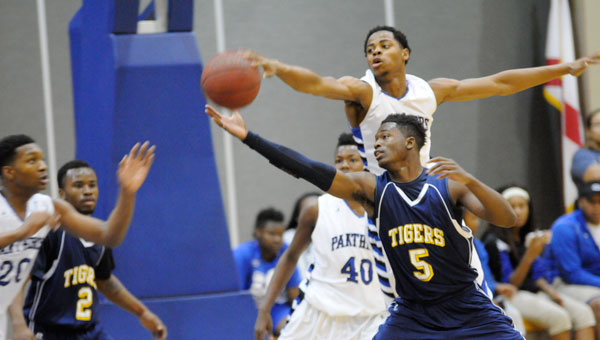 Demarcus Rich was one of several Panthers who proved disruptive to the Tigers’ offense, getting between passes and creating fast break opportunities.

Superior rebounding and a lightning-fast transition offense powered the Georgiana Panthers to an 85-43 win Thursday night.

The win also advanced the Panthers to the next leg of postseason play with a Saturday-evening game against J.F. Shields.

Richard Boggan and Jeremy Sims dominated the post, the latter with his height and the former with impeccable timing, coming down with board after board to give the Panthers second-chance and third-chance opportunities to score.

Meanwhile, the Panthers’ amoeba-like defense was everywhere at once with an imposing full-court press that forced turnovers and fast break opportunities.

When McKenzie made it to Georgiana’s side of the court, however, the Tigers worked tirelessly to penetrate the Panthers’ ironclad interior defense.

Georgiana matched each of the Tigers’ baskets with two of their own, however, with the fast-break spree culminating in an alley-oop from Jay Williams to Boggan that electrified the crowd.  But the excitement came with a  technical foul at Boggan’s expense.

Boggan led the Panthers with 19 points and 15 rebounds.

Jeremy Sims also had a double-double on the night with 14 points and 10 rebounds.

The Panthers will face J.F. Shields on Saturday at Georgiana for the area championship.

Austin Vickery brought energy and life to a struggling Fort Dale offense in the first half, but the Knights’ full-court... read more