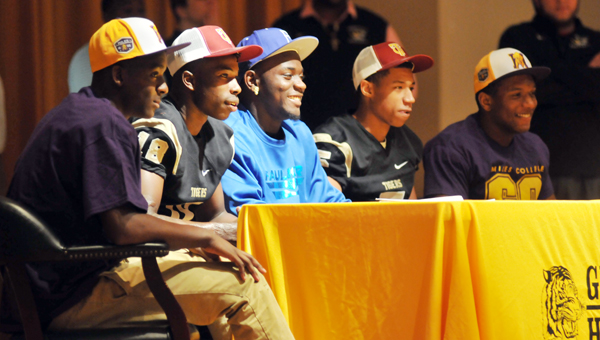 Deafening cheers erupted for each of Greenville High School’s five football players who signed scholarships and intents to play on Wednesday morning in the school’s auditorium.

Cheatham said he picked Tuskeegee because he wants a “better education.”
“It’s a great opportunity,” Cheatham said. “I liked the recruiting visit. Everything went well at the visit.”

Caldwell said he loved the school and knows Miles College has a great football team.

“I love football and I knew I need to go there to get an education,” Caldwell said.

Moore said there wasn’t any other school he wanted to go to except for Tuskeege.

“That’s the school I always wanted to go to,” he said. “They’ve got my major in occupational therapy.”

Haynes said it’s a pretty cool “coincidence” that he’s going to a college that’s the same as his first name.
“I like the offer that they gave me,” Haynes said. “It’s just a blessing. I thank God. It was kind of a coincidence that my name is Myles and I’m going to Miles (College).”

Purifoy said Faulkner’s overall environment attracted him to sign at the Montgomery university.

“I just felt like that was the school for me,” Purifoy said. “I love the coaching staff and when I visited, they just caught my attention. It made me want to sign.

“I like the environment and the school itself,” he said. “I like the law program they have over there as well, too. That’s what I’m thinking about studying when I go up there.”

It’s not every day that one can say that they signed scholarships and intents to play football at their college of choice.

All five said the day was amazing.

“It was amazing,” Caldwell said. “I liked how everybody came out and supported us.”

While it was a special day for Purifoy, he said it was sad, too, because it was the last time he wore his Tiger jersey.

“I’m going to miss my teammates, all my coaches,” he said. “They’ve really been a great impact on me. Myles and I, we all wanted to go to college together, but that changed. That hurt, but we’re going to make an impact.”

Moore said he wouldn’t be signing if it weren’t for his coaches.

“Their hard work paid off and I’m proud of them,” Plott said. “We’re still going to support those guys even though they’re not going to be here. We’re going to watch them play and they can always call if they need anything.”