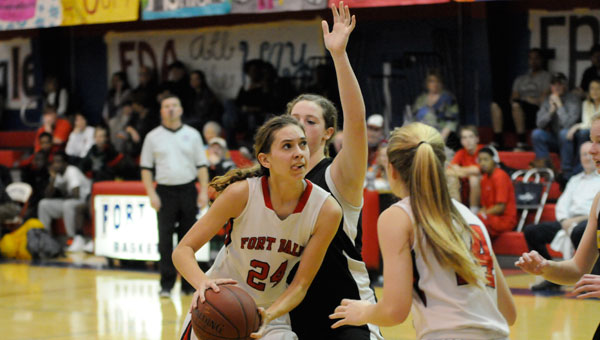 Ashton Scott fights for positioning inside against Autauga’s Raegan Shackelford.

It was all Autauga from the very outset as the Generals climbed to an early double-digit lead in the first quarter, thanks to a dominating inside game led by center Raegan Shackelford and excellent offensive and defensive rebounding.

But Anjoy Castleberry found a way to score within Autauga’s suffocating defense, both from the inside and outside.

A clutch three-pointer from Castleberry eased the sting of the early deficit and cut the lead to 14-7 at the end of the first quarter.

But Castleberry was far from done, as the Lady Eagles took advantage of her hot hand and fed her the ball from beyond the arc for a second three-pointer to claw back into the contest.

Fort Dale also buckled down defensively, as Castleberry got in front of a fast break to take a charge and kill Autauga’s attempt to regain momentum.

The victory was short-lived, though, as another spree of Autauga steals reopened sore wounds to extend their lead to 11 before the half.

Autauga’s offense was just as relentless in the third as they not only dominated the scoreboard, but also the game clock, as longer possessions prevented the Lady Eagles from making a comeback.

The Lady Eagles’ woes continued even while they had possession, however, as telegraphed passes inside to Ashton Scott were picked off multiple times for easy transition baskets for Autauga Academy.

Point guard Kelli Giles led the Lady Generals with a handful of precognitive steals, but the Lady Eagles refused to give up despite the sizeable lead as Castleberry sank yet another three, as well as Tucker Whiddon.

But time was the ultimate enemy for Fort Dale, as the fourth quarter alone wasn’t enough to overcome the large lead.

Castleberry and Scott earned all-region honors during the weekend tournament.

Fort Dale will take its spot as the no. 2 seed in the Huntingdon-hosted state tournament Thursday at noon.

Greenville claws back to topple Calhoun

Javarrius Cheatham was unstoppable in the post and at the perimeter as the Greenville Tigers mounted a comeback victory over... read more