Greenville claws back to topple Calhoun 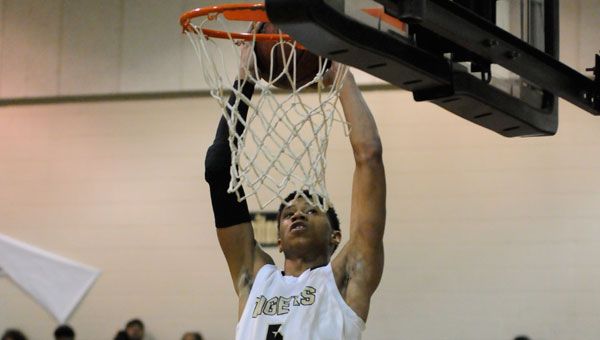 Javarrius Cheatham was unstoppable in the post and at the perimeter as the Greenville Tigers mounted a comeback victory over the Calhoun Tigers 82-74.

2A and 5A giants clashed once again as the Greenville Tigers and Calhoun Tigers squared off at a full-capacity Greenville High School gymnasium in a much closer contest, though the end result was the same.

A second-quarter spree left Greenville on the ropes at the end of the first half, but a third-quarter Greenville surge propelled the Tigers to a 82-74 victory over Calhoun.

The first quarter belonged to Greenville as well, however, as Myles Haynes quickly scored Greenville’s first four points with a putback and a near-dunk.

Javarrius Cheatham silenced the Calhoun crowd with a three moments later—his first of many—to jump Greenville out to an early 7-0 lead.

A floater from Ja’Marcus Davison ended the drought roughly two minutes into the game and laid the groundwork for Calhoun’s early offensive momentum, but it was all taken away in seconds thanks to an electrifying dunk from Ra’heem Moore.

Greenville rode the wave of momentum, utilizing their noticeable height advantage down low to spring ahead 16-8.

Fortuantely for Calhoun, an end-quarter rush—aided by some clutch points off the Calhoun bench—softened the blow.

The second quarter belonged solely to Calhoun, however, thanks to a flurry of three pointers from Jamichael Jordan and the deft hands of Jakeem Davison, who created enough turnovers and fast-break opportunities that the sizeable Greenville lead evaporated in mere moments.

Calhoun opted for a full-court press to harass the flustered Greenville offense even further, and the gambit paid off as Calhoun ended the half with a seven-point lead.

The pendulum of momentum swung for the third and final time in Greenville’s favor in the third quarter as the Tigers began to match Calhoun’s up-tempo pace with a  barrage of three pointers courtesy of Zac Smith and Cheatham.

Another three from Cheatham regained the first lead for Greenville in several minutes of play, and a powerful follow-up from Moore extended the Greenville lead even further.

Cheatham’s hot hand, and an effective transition offense allowed Greenville to outscore Calhoun 26-10 in the third quarter to take a nine-point lead.

The fourth quarter was more of the same as Calhoun scrambled for an answer to the late-game deficit.  Jordan unleashed a number of shots from behind the arc, but the laser accuracy from previous quarters was nowhere to be seen.

But though Jordan struggled from afar, he still attacked the basket relentlessly with a beautiful crossover and score to trim the lead in the closing minutes.

But Cheatham’s answered with a momentum-killing breakaway dunk, only to turn around and steal an incoming pass for another easy layup.

The win improved the Greenville Tigers to 21-5 (now 22-5 following a win in Georgiana) while Calhoun dropped to 16-9 on the season.

Taylor Thomas found success more often than not at the three-point line, but it wasn’t enough to overtake Morgan Academy... read more