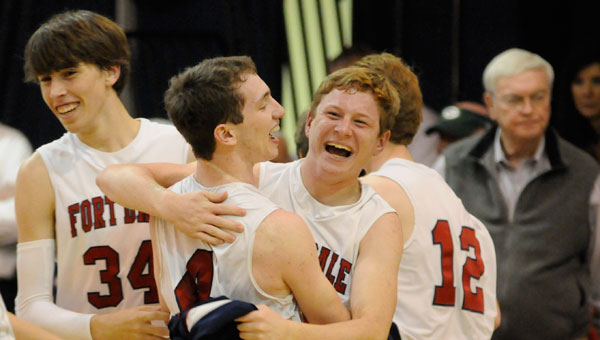 Left: From left to right, Curt Davis, Taylor Thomas and Luke Taylor congratulate each other after a first-place finish in the FDA-hosted area tournament.

The final round saw the Eagles facing a familiar opponent in the Pike Liberal Arts Patriots, but the Eagles remained firmly in the driver’s seat the for much of the game with a decisive 58-45 victory.

Austin Vickery opened the game with a three pointer and two free throws to give the Eagles a small cushion in the first quarter, but he was hardly the only productive Eagle.

A putback from Hayden Davis, a pair of free throws from Taylor Thomas and an off-the-bench three-pointer from Cody Parker set the tone offensively for Fort Dale for the remainder of the game.

The Patriots began to whittle away at the lead, however, thanks to several accurate lobs to big man Tamaris Jameson down low for easy baskets.

Continued pressure from Marquese Christian likewise helped the Patriots close the gap to a mere four points with only 4:30 remaining in the first half.

But Luke Taylor proved the potency of Fort Dale’s depth and came off the bench with not one or two, but three consecutive three pointers to give the Eagles a healthy lead.

The Patriots came out of the locker rooms at the half with a renewed focus, and dwindled the lead to only four by constantly feeding Jameson on the inside for high-percentage baskets.

In no time at all, the continuous lobs to Jameson put the Patriots on top for the first time all evening.

But the Eagles fought back with several clutch baskets from Thomas, as well as excellent positioning down low for an easy basket courtesy of Curt Davis and a potential three-point play.

The Eagles’ defense proved impenetrable in the latter moments of the third, while Thomas punctuated the third quarter with a three pointer to give Fort Dale a nine-point lead.

Team fouls were the nail in the coffin for Pike Liberal Arts as Fort Dale’s pinpoint accuracy at the free throw line put the contest well out of reach for the Patriots.

Vicery and Ryan Burkett earned all-region honors at the tournament’s conclusion, and Thomas was crowned most valuable player.

The Eagles will face Tuscaloosa Academy Thursday at Huntingdon beginning at 4:40 p.m.