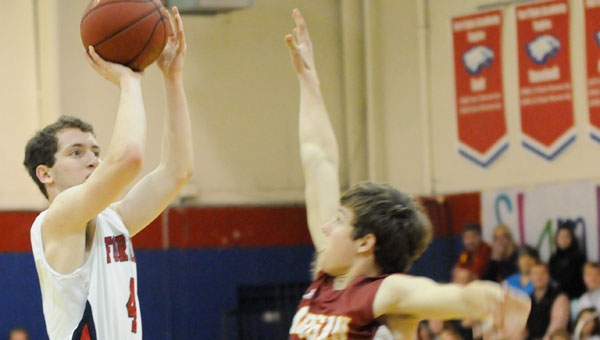 Taylor Thomas found success more often than not at the three-point line, but it wasn’t enough to overtake Morgan Academy as the Senators held on to win 58-53.

Three pointers were the saving grace for the Fort Dale Eagles as they tried to close the deficit with the Morgan Academy Senators late in the fourth, but they were ultimately their demise.

The battle was won at the free throw line as Morgan Academy sank shot after shot to maintain their sizeable lead, despite late-game heroics from Fort Dale’s senior players.

Appropriately enough, Saturday night was senior night for Fort Dale, and that meant an all-senior starting lineup for the Eagles. But the experienced starters weren’t enough to prevent the Senators from jumping out to an early head start, thanks to pinpoint accuracy from downtown.

But Ryan Burkett helped seal the early gap with a shot from downtown of his own, as well as a pair of clutch free throws from Hayden Davis.

The momentum shift gave the Eagles their first lead of the night barely a minute into the second quarter.

Fort Dale’s depth came in handy in keeping up the momentum, as Luke Taylor came off the bench with a three-pointer of his own to sustain the Eagles’ lead.

But the lead began to crumble along with Fort Dale’s composure in the final moments of the half as shot after hurried shot missed its mark, allowing Morgan to overtake them for a one-point lead at the half.

Halftime reinvigorated the Eagles’ senior staff for the third quarter. Curt Davis in particular came out more fired up than usual with improved rebounding and passing that all contributed to a Fort Dale run ending in a six-point lead.

But the ebb and flow of momentum continued to shift as the Senators attacked the basket from every angle in the final moments of the third, ending with a foul and three made free throws to give the Senators a one-point lead again after trailing for the majority of the quarter.

The pendulum of momentum continued to swing as Fort Dale fired off three pointer after three pointer—Burkett sank three in the final quarter alone—but for all of their success from behind the arc, there were just as many misses.

Meanwhile, Senator Woodham Kemmer scored in nearly every way possible for Morgan Academy, culminating in a 21-point game and eight key free throws that clinched the game in the final dwindling seconds.

The Eagles will have an opportunity for revenge Thursday in the opening round of the Fort Dale-hosted region tournament.