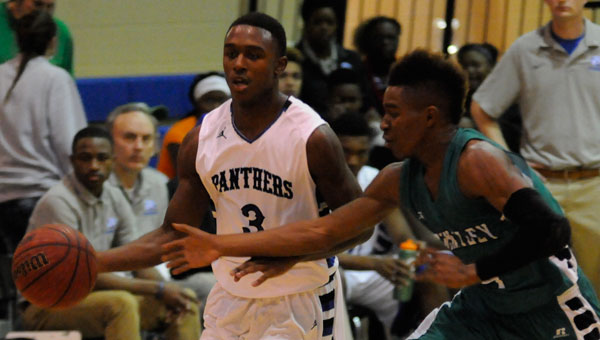 A hungry Brantley team was out for blood Monday night in hostile territory in Georgiana, but the Bulldogs’ bark lost its bite in the second half as the Panthers powered to a 69-47 win.

But a disciplined Brantley defense gave the high-powered Panthers offense all it could handle and more in the first quarter, holding Georgiana to only eight points.

Meanwhile, a pair of threes from Bulldogs Kaisaun Nichols and Frank Harris gave Brantley a comfortable cushion headed into the second quarter.

It was a cushion that the Bulldogs would sorely need, as Georgiana’s offense resembled its usual self and dominated the early portions of the quarter with fast break after fast break that resulted in a 9-0 run and a seven-point lead for the Panthers.

Nevertheless, Brantley’s leading scorer and captain DaRian Jones willed his team back into the game almost single-handedly, with a flashy display of ankle-breaking antics and slicing cuts to the inside that gave the Bulldogs a four-point lead heading into the half.

The second half was an entirely different story, however, thanks to a harassing and aggressive defensive strategy to keep the ball out of Jones’ hands.

Richard Boggan started the second half off with a powerful inside move for a bucket and a trip to the line—his first of many on the night.

Georgiana’s half court trap killed any offensive productivity without the Bulldogs’ leading scorer.  To make matters worse for Brantley, a slew of turnovers allowed the Panthers to dictate the pace of the entire quarter with strips (and subsequent scores) from a talented Georgiana bench, including Demarcus Rich and Jay Williams.

A few Bulldogs stepped up to make some clutch shots to stop the bleeding, including a jumper on the three-point line from center Brandon Frazier, but it did little to stem the tide.

In eight minutes of play, the Panthers managed a 16-point swing to take a 12-point lead headed into the fourth with no signs of slowing down.

A handful of reckless turnovers early in the final quarter only exacerbated problems for Brantley.

The Panthers switched many of its starters out while comfortably ahead, but lost no steam in doing so as the second-stringers maintained and extended the already large lead.

Boggan dominated the inside all night and led the Panthers in scoring with 18 points as well as 17 rebounds.

Jones led all scorers with 20 points for Brantley.

Georgiana will face its final home test in the Greenville Tigers Saturday.