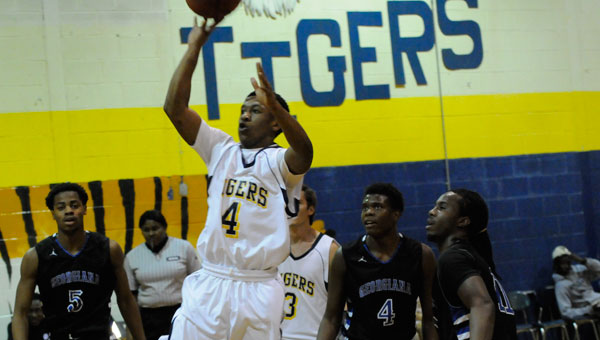 Chris Shufford led the McKenzie Tigers in scoring with 16 points.

The McKenzie Tigers fared much better against 1A powerhouse Georgiana with the backing of their home crowd, but the Panthers’ up-tempo offense proved too much to overcome in the end as the Panthers prevailed 88-41.

To make matters worse, the Tigers faced the Panthers with a decidedly small roster of only seven, with notable players including Condie Pugh and Terrance Clemons sitting Thursday night’s game out.

But despite two early Georgiana takeaways, the Tigers slimmed down their turnover margin considerably from the two teams’ last meeting for a relatively close first half.

Unfortunately for the Tigers, Georgiana was firing on all cylinders from behind the line, with Tarien Crittenden kicking the night off with back-to-back three pointers, with some additional help beyond the arc from Demarcus Rich and Jacquez Payton.

Even with a growing deficit, the Tigers continued to assault the paint led by Chris Shufford, whose continuous attacks eventually began to wear down the Panthers’ big men inside.

The second half, however, was a different story as the Tigers’ small roster began to take effect.

Fatigue set in for McKenzie while the Panthers continued to rotate in a cast of fresh players.  With the added spring in their step off the bench, the Panthers picked off a handful of sluggish passes and found Payton on a fast break down the court for an easy lay-in.

The Tigers mounted a last-ditch effort, with Carrington Bonnick, Ty Adams and William Brown gathering the last of their energy to stem the tide, but the sizeable lead was too much to overcome.

Shufford led the way for McKenzie with 16 points.

The Panthers will host Brantley Monday, while the Tigers travel to face J.U. Blacksher the same night.