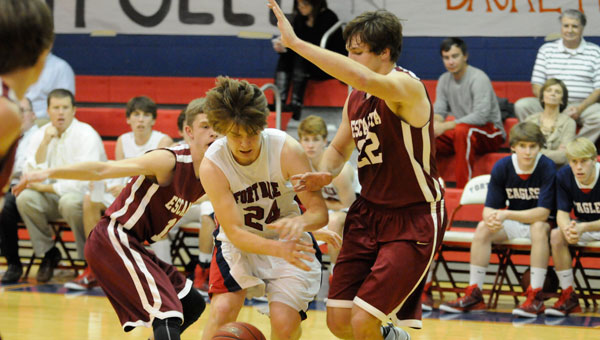 Escambia’s Garrett Kirk made life difficult for the FDA, including Cody Parker, on the inside Tuesday night. Despite an impressive comeback featuring a hail of late-game threes, the Eagles fell just short as the Cougars held on to win 60-55.

A miraculous Fort Dale comeback ended just shy of a happy ending Tuesday night, as the Escambia Academy Cougars fended off the Eagles 60-55 on the road.

Excellent rebounding from Escambia kept Fort Dale at bay for the first quarter of play as shot after shot missed its mark for the Eagles.

Garrett Kirk, the Cougars’ 6’4” menace, was a crimson-clad stop sign in the paint that the Fort Dale Academy varsity boys struggled to shoot around, forcing more than a handful of tough outside jumpers.

Despite the poor start, Curt Davis and Cody Parker earned trips to the free throw line, but each missed both shots to end the quarter scoreless with a 12-0 deficit.

The Eagles fared much better in the second, however, as  Parker broke the silence at the top of the second quarter with two much-needed free throws.

Parker’s number was called often throughout the second for outside looks, and a pinpoint-accurate three pointer from Ryan Burkett closed the gap even further.

The halftime trip to the locker room reinvigorated the Eagles defense, especially with regards to rebounding.

However, Kirk and his supporting cast’s excellent ball movement made it difficult for the Eagles to close the gap.

A controversial foul call ended the third by sending Kirk to the free throw line for two extra points to extend the Escambia lead to 13.

But desperation lit a spark in the Eagles from beyond the arc, as Taylor Thomas, Burkett and others found success behind the line.

Fort Dale’s shift to a full-court press harassed the Cougars enough to cough up a handful of turnovers that cut into the lead even more.

But a barrage of back-to-back threes from Burkett, as well as an additional three-ball from Austin Vickory, cut the lead to just five with only minutes left in the game.

The final possessions were a mad scramble, as an Escambia inbound pass fell into the Eagles’ hands, but then given right back to the Cougars in the game’s final moments.

Though Fort Dale trailed by as many as 16, the rainstorm of threes weren’t enough to make up for the huge deficit early on.