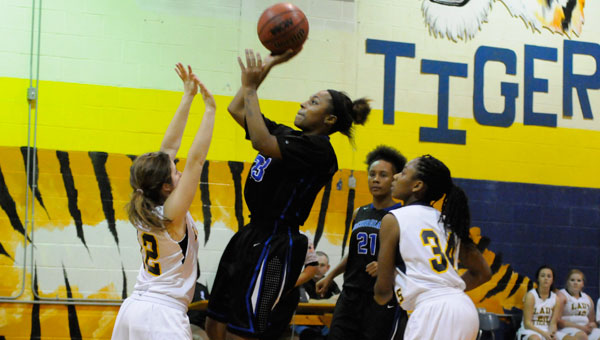 Georgiana lead scorer Tyanna Perkins elevates over a defender for a pair of her 23 points Thursday evening in Georgiana’s runaway victory over its neighboring rival, the McKenzie Lady Tigers.

The McKenzie Lady Tigers did their best to hang with the Georgiana Lady Panthers at home throughout the first half of play, but a mid-game Georgiana surge put the contest well out of hand as the Lady Panthers went on to win 53-12 on Thursday night.

The Lady Panthers applied a full-court press early and often against McKenzie, and it worked often enough for Georgiana to build a comfortable but small cushion early in the second quarter.

But Paige Odom snuck behind the Georgiana defense and sank an open shot to close the gap to within five for McKenzie.

The Lady Panthers defense buckled down soon afterward, creating several turnovers and scoring opportunities for Georgiana that allowed the lead to swell from five to 14 points within the quarter.

The third quarter was more of the same as an impassioned Georgiana defense made it difficult for the Lady Tigers to even get a pass inbound.

A clutch McKenzie three-pointer ended the scoring drought, but did little to slow down the Lady Panthers’ offensive output led by Tyanna Perkins and Miya Riley.

McKenzie’s troubles continued into the final quarter of play, where a combination of traps and rebounding held the Lady Tigers scoreless in the fourth.

Perkins led all scorers with 23 points on the evening.

Escambia’s Garrett Kirk made life difficult for the FDA, including Cody Parker, on the inside Tuesday night. Despite an impressive... read more