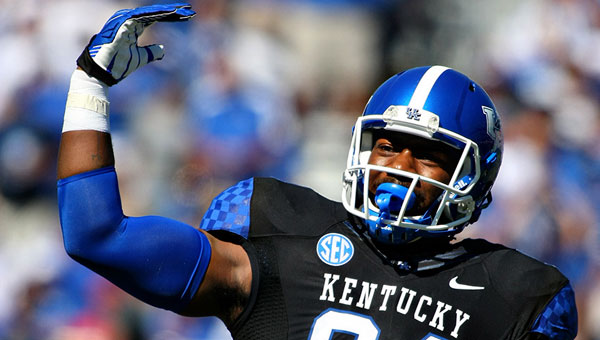 For University of Kentucky defensive end and Greenville native Za’Darius Smith, an invitation to last weekend’s East-West Shrine Game was a potential calling card that could land him a spot in the earlier rounds of the NFL draft.

And if Saturday’s head-turning performance was any indication, Smith’s trip to Chicago’s Auditorium Theatre in Chicago on the last weekend in April might go even better than anticipated.

Smith was recognized as the most valuable defensive player in the East-West Shrine Game on Saturday.

Though the game itself wasn’t much of a competition—six different quarterbacks combined to complete just 26 of 50 passes for 185 yards, zero touchdowns and three interceptions—the event still served as a highlight reel for several athletes to raise their draft stock, especially Smith.

Quick takeoffs from the snap and his ability to apply consistent pressure to a struggling West offense helped kept all eyes on him Saturday afternoon.

Even more impressive is that Smith managed to stand out in a sea of top competitors, including South Florida kicker Marvin Kloss, Florida Atlantic’s Damian Parms and Miami defensive lineman Anthony Chickillo.

CBS Sports draft analyst Rob Rang listed Smith first on his own list of prospects who stood out to him.

In addition, Rang called Smith “the game’s most disruptive defender, using his combination of burst off the snap and long arms to slip past offensive tackles and harass the quarterback.”

“He showed a quick first step and balance, a spin move and an effective bull rush,” Rang added.

The all-star season isn’t over for Smith, as he’ll have another opportunity to shine this upcoming weekend as he was added to the North’s roster for the Senior Bowl after fellow Kentucky standout and projected first-round NFL Draft pick, Bud Dupree withdrew.

The Fort Dale Academy junior varsity girls basketball team walked away from a weekend tournament in Auburn with a second-place... read more