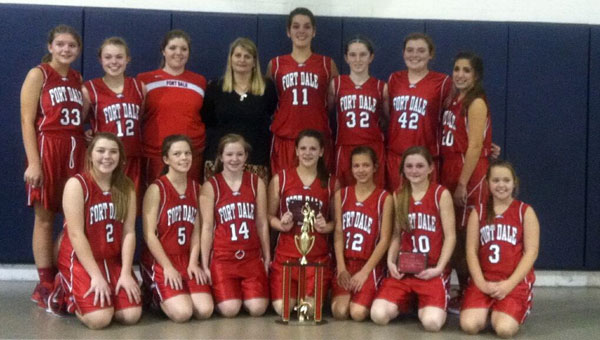 The Fort Dale Academy junior varsity girls basketball team walked away from a weekend tournament in Auburn with a second-place finish.

The Fort Dale Academy junior varsity girls basketball team was only a quarter away from a first-place tournament finish in Auburn this past weekend, but late-game foul trouble allowed Lee-Scott Academy to turn the tide and overcome a 10-point deficit to take the championship round.

FDA junior varsity girls basketball coach Regina Parker said that she was still immensely proud of her team’s performance throughout the tournament.

“We were very physical and quick.  With a  6’3” center, Lucy Bates, we dominated the lane, we were able to get the ball to point guard Tucker Whiddon, who connected with the speed of Anna Blake Langford for the easy lay-up. Overall, I think my team exceeded everyone’s expectations at the tournament.”

Fort Dale was given a bye in the first round, but the Lady Eagles went on to face Escambia Academy in the second round.

It was a close contest until Fort Dale applied its signature full-court press after the first half.

The team came out of the locker room in the third and ran up 16 points quickly from the press to ice the game, beating Escambia 39-18.

The third and final championship round proved tougher, however, as Fort Dale faced Lee-Scott Academy, a team unaccustomed to defeat (Lee-Scott has won the vast majority of their games this season by a margin of at least 20 points).

“It was a very fast-paced and physical game,” Parker said.

Fort Dale did more than hang with Lee-Scott in the first half, trailing by only two at halftime.

“At halftime, I told my girls that they proved that they could compete, and now let’s come out running our press and don’t let up,” Parker added.

The Lady Eagles opened the third quarter with a bucket to tie the game, and swung momentum in their favor to take a 31-21 lead at the end of the third.

Unfortunately, Fort Dale was forced to remove its guards due to foul trouble in the last quarter of play.

Lee-Scott took advantage of it and applied a full-court press, turning the tide and ultimately defeating the Lady Eagles 41-34.

But Parker said that she and her players found victory in defeat.

“We proved that our team could compete with the best in the state,” Parker said.

“I’m extremely proud of all my girls this year.  We had great leadership from our ninth graders, and we played as  a team.  We are 14-3, and we’ve had a great season.  I couldn’t be more proud of them.  We have three games left, and we should end up 17-3.  This team, however, will not be content until they’ve earned a state championship.  I expect they will during their varsity years under Coach Mantooth.”

Langford, Bates and Whiddon scored 19, 8 and 3 points respectively in the championship round against Lee-Scott.

The weekend was business as usual for Georgiana’s basketball team as the Panthers defended their home turf against the Highland... read more