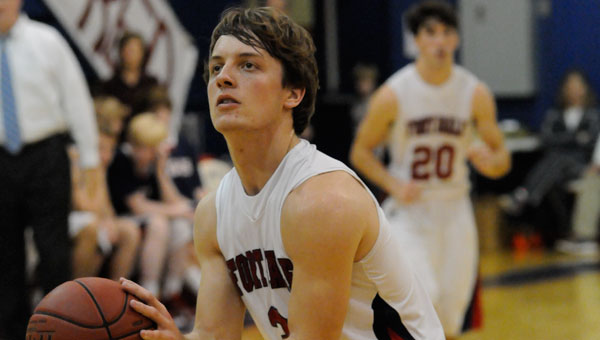 Ryan Burkett sank more than a couple of clutch three pointers to extend Fort Dale’s lead to as many as 17 Tuesday night in the varsity boys’ win over Pike Liberal Arts.

The white-hot hand of Taylor Thomas guided the Fort Dale Academy varsity boys to a 58-39 victory over the rival Pike Liberal Arts Patriots.

Thomas imposed his will early and often for the Eagles, putting the first 10 points on the board for Fort Dale in every way imaginable (two three-pointers, two free throws at the line and a put-back).

The Patriots trailed right behind, as Tamaris Jameson proved a powerful presence on the inside for a handful of easy lay-ins.

The second quarter saw the lead dwindle to a single point as a harassing Patriots defense forced a number of turnovers and fast break opportunities, but the aggressive approach also led to early foul trouble.

The back-and-forth scramble drug on for nearly four minutes of scorelessness, but it was Austin Vickory who broke the Eagles’ silence with a three-pointer with roughly three and a half minutes left in the first half.

Thomas’ good night continued, slicing to the basket and drawing a foul in the process for a three-point play.

Thomas also ended the half resoundingly with a  three-point buzzer beater to give the Eagles a seven-point lead going into the half.

The momentum built in the closing moments of the first half continued to grow for Fort Dale in the third quarter, as Ryan Burkett gave the Eagles their biggest lead thus far with back-to-back threes for a 17-point cushion.

The Eagles offense was firing on all cylinders at the perimeter and in the paint, as Hayden Davis found success against Jameson and company for a pair of buckets.

Though both offenses found a stronger offensive rhythm in the second half, the barrage of Fort Dale three-pointers and excellent ball movement sealed the deal well before the final seconds ticked off the clock.

It was Madison Langford who shifted gears from her normally defensive play and got the Lady Eagles off to a fast start with a quick four points.

The Fort Dale offense in turn set the pace for a patient defense that offered few looks for the Lady Patriots.

Pike Lib found a response in Megan Johnson’s soft touch beyond the arc, which kept the contest close with some clutch three-pointers throughout the night, but the Lady Eagles’ lead grew exponentially in the second quarter thanks to a fairly even scoring spread among the five Fort Dale starters.

The second half saw a much more tenacious Lady Patriots defense, forcing tough low-percentage shots at the perimeter, but it was Anjoy Castleberry who struck first with a laser-guided three-pointer from downtown to keep the Lady Eagles’ offense moving.

The outside threat opened up an inside game for Ashton Scott, who had a field day in the paint throughout much of the second half and finished the night with a game-high 18 points.

The Lady Patriots entered desperation mode in the fourth, however, stringing together a series of points to chip into the substantial lead.

Though the Lady Patriots actually managed to outscore the Lady Eagles in the fourth quarter, the 32-10 deficit coming into the final quarter of play proved too much of a gap to overcome.

Region play continued for the Georgiana varsity boys Tuesday night in Red Level as the Panthers walked away with a... read more