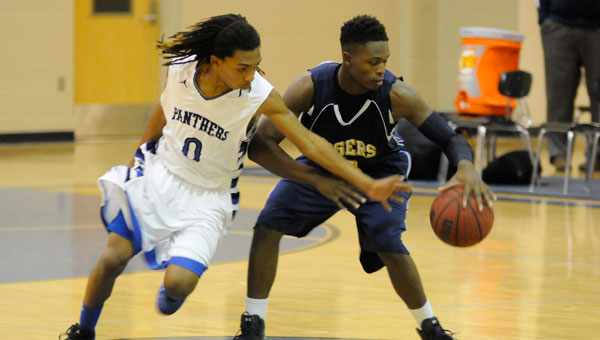 McKenzie’s Terrance Clemons spins away from Georgiana defender Devin McMeans on the way to the basket.

An on-fire Georgiana offense helped offset the below-freezing temperatures Thursday night as the Panthers defended home court against their next-door neighbors, the McKenzie Tigers, with a 74-18 win.

It was all Georgiana from the outset as the Panthers owned the boards, creating second-chance opportunities and taking them away from the Tigers.

Meanwhile, the Tigers struggled to find an offensive rhythm, thanks to a stifling full-court defense applied by the Panthers.

McKenzie head basketball coach Josh McLendon said that he knew he would be facing at tough battle, calling the Panthers the toughest area team by far for his players.

“They’re a good team that’s been playing together for a while.  Coach Norris is doing a good job with them, and I’m looking for them to really make some noise in the playoffs,” McLendon said.

“They’re athletic and they’re fast, and that’s what you want to do when you’ve got a defense like that.  Put pressure on the ball and force you to make mistakes.  It’s a good plan and it’s using their athletic ability as one of their strengths.”

The up-tempo Panthers outpaced McKenzie 19-4 at the end of the first quarter, and it was a deficit that proved too difficult to overcome.

Regardless of the score, McLendon was proud of his team’s effort.

“I think we’ve shown signs of getting better, and there’s times where I see it in small spurts and then old habits creep back in there,” McLendon said. “I think sometimes we get in our own way, and if we can not create a lot of turnovers, we will be OK.  But it’s not for a lack of effort, that’s for sure.”

Georgiana head basketball coach Kirk Norris said that he was proud of his team’s focus and team play, which has been a constant factor of their success all season long.

He’s been just as impressed with the Panthers’ depth, which has allowed the team to sustain it’s break-neck pace throughout all four quarters.

“I think we can interchange any of our guys out and not lose much, or anything.  These kids have worked hard and put in the time, and they’ve got the talent,” Norris added.

“It’s good to have that because you have some nights where two of your starters maybe aren’t playing as well as they can, and we have two guys off the bench that can give us a lift.”

On Tuesday, the Tigers face J.F. Shields and the Panthers travel to Red Level, but McKenzie and Georgiana will face off again Thursday at McKenzie.