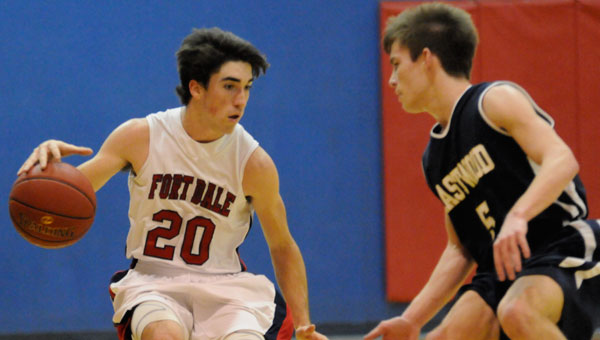 Despite trailing for the majority of the game, the Fort Dale Eagles held on to take a narrow 39-36 win over the Eastwood Academy Warriors Saturday evening.

Despite a handful of good looks at outside shots for Fort Dale, the Eagles had difficulty hitting their mark.

The Warriors enjoyed an early hot hand in John Michael Johnson, who found success from beyond the arc twice.

Otherwise, a low-scoring first quarter set the pace for a defensive contest, but Eastwood strung together consecutive steals to close the quarter with a four-point lead.

It was a lead that the Warriors wouldn’t relinquish for nearly three quarters.

The Eagles’ troubles compounded after losing a few stray passes to the Eastwood defense as the deficit climbed to seven.

Fort Dale cut the lead to as little as one point, but some precognitive passing ability from the Eastwood bench led to easy buckets and another seven-point lead to close the half.

The three-ball finally fell for Fort Dale, courtesy of Austin Vickory, to begin the Eagles’ dig out of the seven-point hole they’d found themselves in.

A series of back-and-forth scoring continued until momentum ultimately began to swing in Fort Dale’s favor early in the fourth, thanks to improved rebounding and a renewed focus on easier inside baskets.

The strategy paid its largest dividends on a slicing cut to the baseline from Taylor Thomas that put the Eagles in a threatening position to retake the lead.

Moments later, Ryan Burkett fought for a rebound down low and came back up with a put-back that gave Fort Dale its first lead since the opening moments of the first quarter.

But the Eagles weren’t quite out of the woods, as a foul on a free-throw attempt gave the Warriors a pair of free throws, another possession and, eventually, the lead once again.

But Burkett would once again dominate the key and come up with yet another second-chance bucket to give the Eagles the lead once and for all.

The Lady Eagles put on a dominating display Saturday afternoon over the Eastwood Lady Warriors in a convincing 45-26 victory.

An aggressive inside game from Madison Ann Gaston and Ashton Scott, as well as a soft touch from Marion Lightfoot on the outside from beyond the arc, held the Lady Eagles aloft of the competition.

But Eastwood made the first quarter competitive, only trailing by three heading into the second.

It was in the second quarter that the Lady Eagles began to pull away, as Scott proved nearly automatic on the inside using her towering frame for uncontested shots.

A great dish from Gaston to Scott extended the lead to double digits, eventually totaling at 13 points before the half.

To add to Eastwood’s woes on defense, the unit found it difficult to maintain control of the ball on their own half of the court, leading to countless second-half turnovers and more opportunities for Fort Dale.

A last-ditch effort surge from the Lady Warriors late in the fourth wasn’t enough to overcome a lead that grew to as many as 20 points.

The junior varsity Fort Dale boys grabbed an early lead and maintained it for nearly the entire contest against Eastwood Christian, as the Eagles walked away with a 41-34 victory.

But the Warriors began to chip away at the 18-10 lead that the Eagles had built in the first half.

Fortunately for the Eagles, the dual threat of Luke Taylor’s inside and outside game gave Fort Dale enough consistency with scoring to retake a commanding lead heading into the final quarter of play.

Warrior Andrew Hines took over completely for Eastwood Christian with multiple aggressive attacks at the basket that led to several trips to the free throw line.

But the Eagles were able to score in stride with the Warriors to maintain their already sizeable lead, leaving Eastwood with no opportunity to narrow the gap.

Fort Dale alumnus Will Davis followed in the footsteps of his father, who played for the legendary Bear Bryant, to... read more