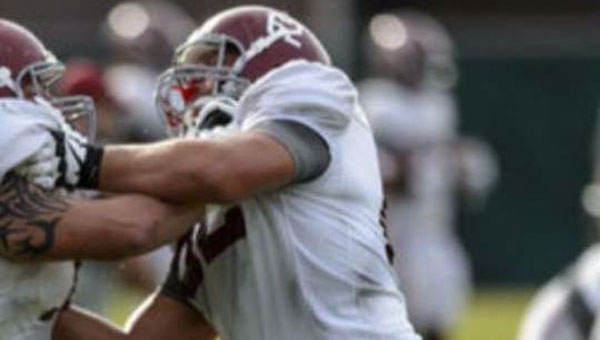 Fort Dale alumnus Will Davis followed in the footsteps of his father, who played for the legendary Bear Bryant, to join the Alabama Crimson Tide.

Several Crimson Tide fans tuned in to the University of Alabama’s game with Ohio State, but one Fort Dale Academy alumnus had a better view than most of Thursday night’s action.

Sophomore Will Davis has spent the past two years with the Crimson Tide as a member of the scout offense, paving the way for an eventual starting position.

And though Davis hasn’t locked that position down just yet, his current responsibilities are ones that he takes very seriously.

“We watch film on [the opposing team’s] offense, and try to mirror what they do,” Davis said.

“It’s definitely important.  It helps those guys slow the game down so they can do what they are supposed to do without a second thought.”

The often thankless position on the scout team offense doesn’t bother Davis in the slightest.

Instead, he’s opted to make the most of his experiences with a talented Alabama football team.

Practices each day are routine and without much deviation, which Davis considers one of the program’s many strengths.

Preparation for each and every game is roughly the same, no matter the stakes.  This was even true for the biggest game of the 2014-15 season–the Sugar Bowl.

As a graduate of Fort Dale Academy and a former member of the Eagles football team, Davis said the lessons that have stuck with him the longest from his time at FDA were the ones learned off the field.

“I think the life lessons I learned from all the coaches were most important,” Davis said.

“Coach Lowery, Coach Gardner and Coach Speed helped me a lot in preparing mentally for what was coming when I decided to walk on.  They always encouraged me, especially Coach Gardner.”

Even those lessons did little to prepare Davis for the atmosphere of one of the very first college playoff games in history.

Fortunately, the historical significance of the game occupied few of his thoughts.

“Football is football at any level,” Davis added.

“The speed changes, but it’s still the same game we fell in love with when we were little.

But the atmosphere was electric.  That dome gets really loud, and both teams played hard.”

Unfortunately for the Crimson Tide, it was the Ohio State Buckeyes that walked away with the win and a trip to next week’s national championship game.

While Davis has no immediate plans for the offseason, he’s looking forward to the challenges that the next season presents.

“I’ll be in a tree stand until we have to be back for class,” Davis said.

“But I’ll be working to get stronger and faster to fight for a spot in the spring.  I have no doubt Coach Scott Cochran will get me there.”