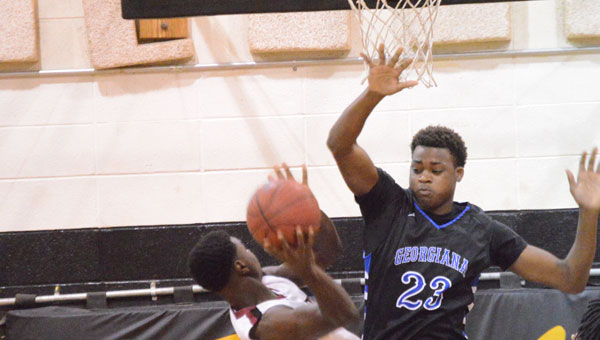 The towering 6-foot-6-inch frame of Panther Jeremy Sims proved an invaluable presence as the Panthers took another first-place tournament finish, this time in Red Level.

The Georgiana Panthers held off the Andalusia Bulldogs 66-59 Monday night in front of a packed house to win the Red Level Christmas tournament. It was the second time the two teams have met this year. The Panthers annihilated the Bulldogs in their previous match up this season in Andalusia.

In an exciting first period, the Panthers held a slim 12-11 lead. Tarian Crittenden had the hot hand busting two 3-pointers for the Panthers. Devante Jackson had 5 points in the first for the Bulldogs.

It continued to be a slugfest between the two powerhouses, but the Panthers still lead by one at halftime 33-32. Freshman B.J. Anderson did a great job driving to the basket, and finished the second with 6 points. Richard Boggan had 6 points for the Panthers in the second.

Recently the Bulldogs have been using the second half to dismantle their opponents, but the Panthers weren’t going to let that happen to them. The Panthers scored 21 points in the third, and the Bulldogs only managed 12 points. Heading into the final period of the championship game the Panthers had their biggest lead of the night 54-44. Jamal Hourel accounted for 4 of the Bulldogs’ third period points. Crittenden remained dialed in with 5 points, including a big 3-pointer to extend the Panthers’ lead.

The Bulldogs were led by Anderson and Jackson with 14 points each. Trevor Parker finished the night with 12 points.

Crittenden paced the Panthers and led all scorers with 18 points, and Boggan totaled 17 points.