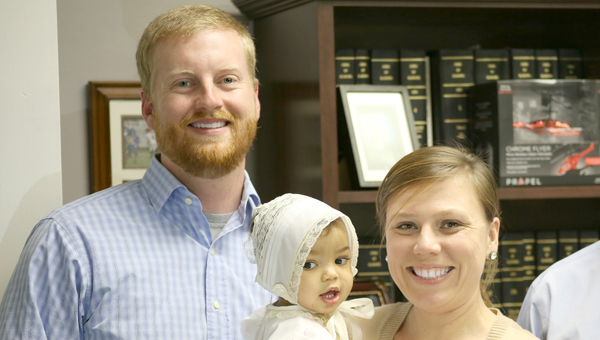 Foster parents Alicia and Marty Sexton of Greenville are over the moon with the new addition to their family.

A four-and-a-half-week old baby girl was placed in the Sexton’s home on Valentine’s Day in 2013. Just over 11 months later, the adoption was final and Quinn Elise officially became a Sexton.

Alicia and Marty are pretty overjoyed to have Quinn in their lives.

“We couldn’t be happier,” Alicia said. “She has blessed us beyond anything we can ever imagine.”

Now at 2 years old, Quinn is walking, talking and even running, Alicia said.

“Quinn is the baby we couldn’t have and buddy, she’s the center of our world,” she said.

The process of adopting a child varies with each family, Sexton said.

“Our process took almost a year,” she said. “But, for others it may take less or more. It just depends on the circumstances of the child. As a foster parent, you’ve got to always remember the best interests of the child.”

While the adoption time differs based on the circumstances on the child, the policy never changes.

Sexton said a child is placed with a foster parent and the main goal is the reunification of the child with his or her parents or other relative.

“Through the Department of Human Resources, the foster child is reunified with their parents,” she said. “If reunification isn’t possible with a family relative, a mother or father, the foster parents are given first choice to adopt.”

“Being an adoptive mom is one of the most amazing blessings in my life,” Alicia said. “The joy that Quinn brings to our lives is unimaginable. The foster care-adoption process has been very fulfilling to our family.

“We have seen God at work in the lives of foster and adoptive mothers, and fathers who have been longing for children to love and nurture,” she said. “We encourage people to learn more about foster care.”

Sexton said there are many misconceptions about foster care.

“If you never open your heart and home you will never know,” she said. “Being a foster and adoptive parent has been a blessing to our family.”