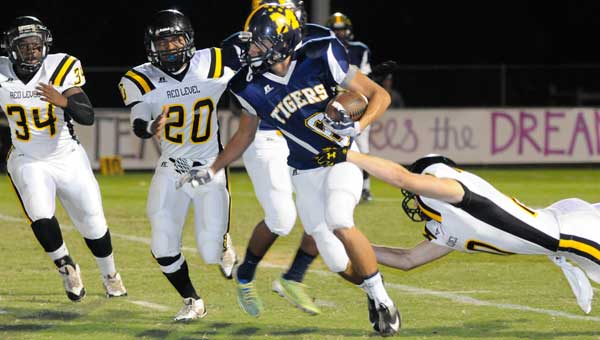 McKenzie wide receiver and defensive back Condie Pugh was one of 120 high school athletes selected from around the nation to participate in this year’s Offensive-Defensive All-American Bowl, which is set for Jan. 4 at the Florida Citrus Bowl Stadium in Orlando.

The McKenzie Tigers might not be in the running for the 1A state championship this season, but one among their ranks will find himself in some rather elite company come January.

Condie Pugh was selected among 120 of the nation’s best youth and high school athletes from around the nation to participate in the Offensive-Defensive All-American Bowl, which is slated for Jan. 4, 2015 in Orlando, Fla.

The bowl, which is entering its ninth year, is an annual high school football all-star game created to shine a spotlight on the nation’s top athletes.

When Pugh found out that he’d been selected to participate, his naturally-calm and composed demeanor dropped slightly.

“At first, I was just surprised,” Pugh said.

“I hadn’t ever really been noticed or anything like that.  But it just proves that hard work will get you somewhere.”

For the wide receiver and defensive back—who also moonlights as a running back and quarterback, on occasion—practice makes perfect.

“You practice how you play,” Pugh said.

Few are more aware of Pugh’s work ethic than McKenzie head football coach Josh McLendon.  But despite that, McLendon insists that his talent isn’t his only notable quality.

“First of all, he’s just a great kid,” McLendon said.

“He’s a good young man, he works hard and he does exactly what we ask him to do.

“He can play quarterback, receiver, running back—whatever we need him to do, I think he can do it and he’s willing to do it.  He’s easy to coach, he’s eager to learn and he always wants to know what he can do to get better.  He’s just a good kid to have around, I enjoy coaching him and I’m glad he’s a part of our program.”

Pugh isn’t sure what position he’ll play for next month’s bowl game, but he also doesn’t seem concerned about it.

“I would think probably wide receiver, but it wouldn’t matter to me,” Pugh added.

What matters a bit more—even more than the potential college scouts—is the chance to take the field again before spring rolls around.

“I’m just excited to be playing in it,” Pugh added.

“I want to get recognized by scouts, but I’m not really worried about that right now.  I’ve still got another year.”

2015 will mark Pugh’s senior year with the Tigers, where he’ll undoubtedly serve as a source of leadership for a McKenzie team that has become accustomed to success in recent years.

And though those who know Pugh best know he’s also not one for words, he’s confident he’ll find a way to set an example.

“I just lead by action.”

Pugh will play in the Offensive-Defensive All-American Bowl game on Jan. 4 at 9:30 a.m. at the Florida Citrus Bowl Stadium.