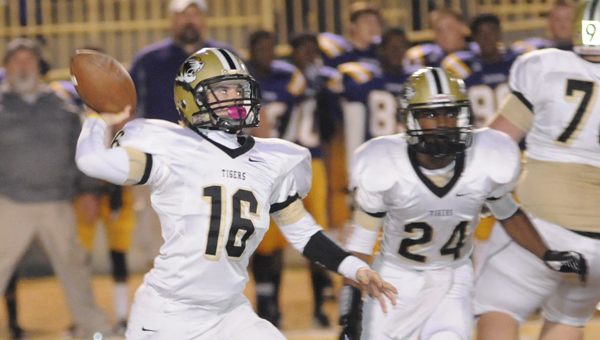 JACKSON — Cheers erupted as the final seconds ticked off the clock, but for the first time in a long time, the source wasn’t coming from the Greenville stands.

The Tigers fell 30-7 on the road against the Jackson Aggies in the third round of the Class 5A state playoffs. A struggling GHS offense faced one too many hurdles to mount a comeback against a dangerous JHS backfield.

Most distressing for the Tigers was a game-ending injury quarterback Brandon Simmons sustained in the opening minutes of the first quarter.

“Not having Brandon in kind of let a little air out of us offensively, but the guys kept playing hard,” said Greenville head football coach Patrick Plott.  “We just made too many mistakes versus a good team tonight.”

But backup quarterback Winston Sims made a fine showing on his first drive, getting the job done with his arm and legs and, ultimately, capping off the drive with an 8-yard toss to Ra’heem Moore for a Tigers touchdown.

“One thing we know about Winston is that he’s gonna go at it and give you everything he’s got, and I’m proud of the way he came in and played tonight,” Plott added.

It would be the first and final time that the Tigers found the end zone.

The Aggies answered with lightning speed, carried on the legs of quarterback Demarcus Williams to even the score in a matter of minutes.

And while the Aggies’ front defensive line made the night hard for Sims, Jackson’s offensive line proved an impenetrable wall in stopping an otherwise unstoppable Greenville defensive front.

Williams took advantage of a blown coverage on a 51-yard pass to Antonio Fox to extend the lead 17-7.

Thanks to remarkable concentration, Fox did so again with just seconds left in the first half after reeling in a tipped pass on an otherwise beautifully defended play from Greenville defensive back Aquintas McDole.

Plott said that offensive woes ultimately were the nail in the coffin.

“Against a team like that, you can’t be one-dimensional, and they were able to stop us from running, so when we dropped back to pass, they just threw everything at us,” Plott said.

Though Plott regretted having the season end on a sour note, he added that he was thankful for the opportunity to meet a great crop of seniors.

“These guys were great. They set the tempo from day one in the weight room during the offseason, and they came to practice every day and worked hard,” Plott said. “I’m so proud of those guys, and I hate that it ended right here and right now because they deserve better.”

As for everyone else, it’s not the end of the road — not by a long shot.

“We’ve just got to get in the weight room, go to work, and get stronger and better,” the coach said.

The Georgiana Panthers opened the 2014-15 season in grand fashion with a dominating 80-37 non-conference win over the J.U. Blacksher... read more