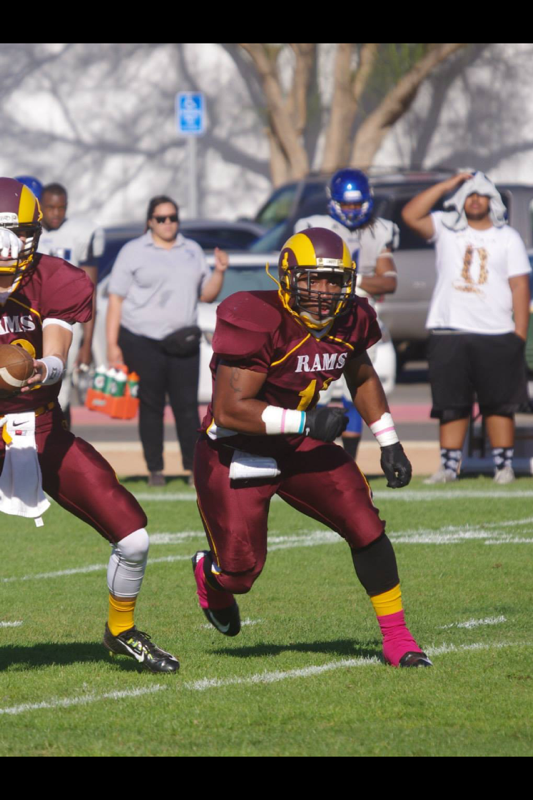 One Greenville High School alumnus has found more than victory as a member of the California-based Victor Valley Rams college football team.

Cornelius Ball, a 2013 graduate of GHS, left the Camellia City as a middle linebacker with no concrete idea for future plans.

These days, he’s fairly confident that he’s where he needs to be, even if it’s a place he probably didn’t suspect.

Ball spent the vast majority of his high school athletic career hindering opponents at or behind the line of scrimmage but, for the Rams, that’s the last place he wants to be.

“One of my head coaches called me to the office and asked me if I wanted to play running back,” Ball said.  “I was pretty skeptical for a little bit, but he gave me time to think about it and I came back and told him yeah.”

Ball added that he thought it would be a better career decision to move to running back, considering his 5-foot-9 frame as well as those of professional linebackers, whose heights average in the ball park of 6-foot-2.

The position change was a big jump in more ways than one for Ball, especially given the other adjustments he’s had to make—the move to California and transition from high school football to college are just two of many.

But upon entering the week-six confrontation against San Bernardino Valley College in the third quarter and breaking out for a 15-yard gain on his first touch, it’s been mostly smooth sailing ever since.

The same could be said for the Rams as a whole, who have enjoyed an unprecedented 10-0 2014 season.

Unfortunately, the perfect run came to an abrupt end in the final post-game handshake of the year when the mutual acknowledgement of skill turned into a miniature brawl.

Regardless of which side instigated the confrontation, the incident removed the Rams from bowl eligibility.

The upsetting turn of events only fueled Ball’s fire to improve in the offseason and properly adjust to his new position, especially in the wake of his projection as the Rams’ no. 1 back next season.

On the positive side, it does give him an opportunity to follow his alma mater’s playoff run more closely, especially his younger cousin, Joey Purifoy.

“Back when I played linebacker in high school, he was my backup,” Ball said.

“He’s really come a long way, and I’m really proud of him.”

But Ball’s biggest admiration is reserved for his parents, Myra and Coleman Ball, to whom he said he owes everything.

“They’ve been my inspiration my whole life.  They’ve always been there for me through everything,” Ball said.

“They’re the reason I’m at this point in my life, because I grind every day.  I work my butt off in class work-wise and football-wise just for them so hopefully in the next six years, they don’t have to work anymore because I’ll have achieved my NFL dream.”