Simmons tabbed for Athlete of the Week 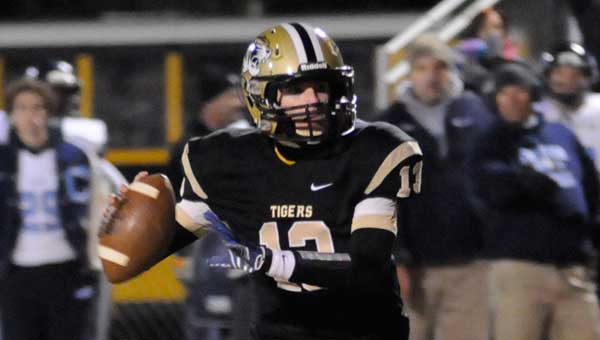 Five touchdown passes from Brandon Simmons helped secure a second-round win for the Tigers, but it also earned him recognition as a nominee for the Hardee’s Fever Star Athlete of the Week.

Five touchdown passes in Greenville’s comeback win from behind earned sophomore quarterback Brandon Simmons recognition as a nominee for Hardee’s Fever Star Athlete of the Week.

The distinction marks the third time a Greenville Tiger has been chosen as a nominee, and a win this week would place two Tigers in the final consideration for Fever Player of the Year, alongside week six winner Raheem Moore.

“It’s just a good feeling that they took the time out to recognize me and two other players in the state to be recognized for that,” Simmons said.

“It shows a lot about the talent that we have.  We could be nominated every week if we play the way we should.”

Few could argue that the Tigers are playing anything but their best football of the season, however, given last Friday’s double-overtime performance against the Calera Eagles.

And though Simmons is no stranger to the limelight—he started three earlier games this season, including homecoming, senior night and the matchup against Georgiana—last Friday’s start was a decidedly different atmosphere.

“Last year, I went from playing maybe one or two drives just because we were up a lot of points to coming in and basically starting a few games as a sophomore while our starter is out, but starting the second round of the playoffs against the team that has the no. 1 offense in 5A football… it was one of the biggest starts I’ve had in my whole high school career,” Simmons added.

“But I’ve always prepared for it.  And when my number was called, I had to perform.”

With the rare foresight of a middle-school athlete, Simmons elected to stay back his eighth-grade year to prepare for an opportunity to start by at least his sophomore year.

Becoming a three-year starter for the Tigers has always been priority no. 1 and, fortunately, he’s had a supporting cast to help him accomplish just that.

Senior quarterback D’raylen McGrew, who suffered a season-ending injury in the first round, has been the Obi-Wan to Simmons’ Luke Skywalker for the duration of the 2014 season.

“He’s been in my ear all year long telling me the things that I do right or the things I do wrong,” Simmons said.

“He and I have been so close this year—when he’s on the field, I tell him what I see and when I’m on the field, he tells me what he sees— and he’s been a big part of why my confidence has been so great this year.”

The other chief ingredient to his success thus far is the faith of Greenville head football coach Patrick Plott.

Following Simmons’ early interception that resulted in a touchdown for Calera, and much of the momentum throughout the first half, it was Plott’s faith that helped him maintain his composure.

“You’ve got to play the next play—you can’t dwell on the bad things that happened,” Simmons said.  “I threw the pick, came to the sidelines and I was ready for the next possession.  I didn’t even worry about it.  When I came in at halftime, Coach Plott told me that we won’t punt the ball again.”

And, other than an errant pass on fourth down on the second-to-last drive of regulation, the Tigers did exactly that.

But for Simmons, the focus lies not on the Athlete of the Week nomination, but in Friday’s opponent.

Now that the 10th grader has a full playoff game under his belt as well as the trust of his coaching staff and players, his confidence is even more bullet-proof than before.

“We’ve been watching film on them from Sunday, and we’ll be watching film on Friday morning,” Simmons said. “I just know, from the attitude of my whole team, that we feel confident that we can knock them off.”

Joey Purifoy proved worth his weight in gold for the Tigers defense both on and off the field. The Greenville... read more