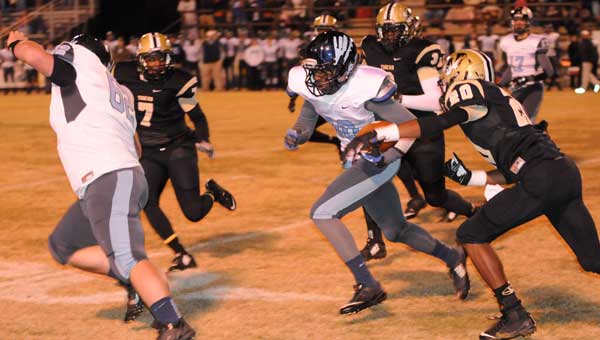 The Greenville Tigers’ signature swarming defense ground the Calera Eagles to a halt in the second half Friday night to propel the Tigers to a double-overtime win.

The Greenville Tigers steamrolled their first-round opponents, the Sylacauga Aggies, by a wide margin, but faced an entirely different fight in the second round with the Calera Eagles.

The jump in difficulty from one round to the next is something that Greenville head football coach Patrick Plott is well aware of, and he’s expecting another difficulty spike Friday on the long road ahead to a 5A state championship.

“This time of the year, when you’re in the playoffs, the games are going to get tougher each week as competition gets better,” Plott said.

“I am [expecting another jump this week], but we’ve just got to rise to the occasion.”

Rising to the occasion isn’t wholly new to the Greenville Tigers.

The team lost its starting quarterback, D’raylen McGrew, at perhaps the worst possible time, as well as a handful of key components in the Tigers running game earlier this season.

The third-round opponent, the Jackson Aggies, proved too difficult an obstacle for the Tigers in 2013, coming out on top against Greenville 49-6 last season.

And while Plott can’t speak for last year’s team, he has nothing but the utmost confidence that his players can get the job done in two days.

“I don’t know that we’re better because I don’t know what happened last year and what last year’s team did,” Plott said.  “But I know they’re a group of guys that play hard every snap, they never get down and they keep their emotions intact and work hard day-in and day-out.”

It was that same persistence that led the Tigers to victory even after trailing 19-0 to Calera just last week.

“I think it gave our guys a lot of confidence in knowing that no matter what happens in the game, even if you’re down in the game, you have a chance to come back and win,” Plott added.

Still, the Tigers would like very much to avoid finding themselves behind the Jackson Aggies 19-0.

According to Plott, the best way to stay out of the hole is to avoid digging it in the first place.

“We need to get off to a fast start,” Plott said. I feel like now, we’ve got all of our jitterbugs and nervousness out of the way.  Now, we just need to go out and get out to a fast start and limit our mistakes.”

And while the Tigers won’t enjoy the benefit of home field advantage as they have these past two weeks, Plott said that he and his players can feel the entire city’s support wherever they go.

“It’s been great to have the community support our players.  We feed off of the community, and it is a community effort,” Plott said. “I would like to think that we’ll get a lot of people to support us and travel with us down there.”

The Tigers travel to Jackson for round three Friday at 7 p.m.