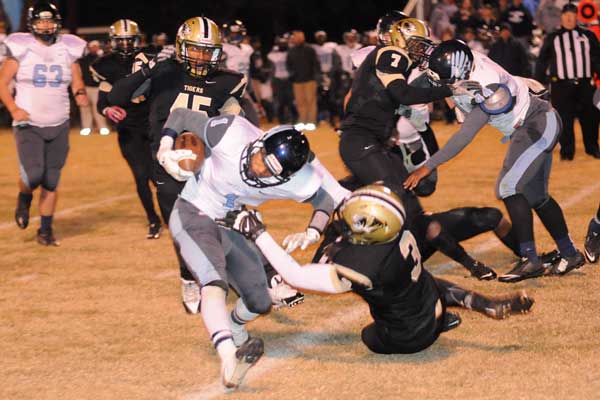 Joey Purifoy proved worth his weight in gold for the Tigers defense both on and off the field.

The Greenville Tigers braved the elements and a 21-point deficit to take a 34-31 victory over the Calera Eagles in double-overtime.

But the first half belonged to Calera, as Trey Jones got the ball rolling for the Eagles with an interception taken all the way to the house for Calera’s first score of the night.

Greenville quarterback Brandon Sims struggled early and often to find a rhythm in the pocket during the first couple of Tiger possessions, but the Eagles moved the ball nearly at will thanks to the potent duo of wide receiver Kyle Harrell and running back Shakeith Tyes, steadily marching the length of the field for a Harrell touchdown grab and a 14-point lead.

The third drive saw just as much success for the Eagles, as quarterback Ty Evans jaunted into the end zone for six more after bobbling a botched snap.

It would be the final Calera score for the next two quarters.

At the half, Greenville head coach Patrick Plott said that it didn’t take any particular locker room message to inspire his players.

“I just told them that we had to come out in the second half and play Greenville football,” Plott said.

The second half Greenville offense was unrecognizable from it’s first-half self as Simmons settled into a groove that granted him laser-accuracy to his favorite three wide receivers, Javorris Cheatham, Myles Haynes and Ra’heem Moore.

Each of the three reeled in touchdown grabs to whittle away at the deficit, with the most impactful going to Haynes on a corner route to the back pylon for the 21st unanswered point with 41 seconds remaining in the game.

While the Tigers’ receiver unit earned their keep, it was Simmons—who stood in for injured quarterback D’raylen McGrew—that likely earned the game ball.

“I just told him how proud of him I was,” said Plott after a postgame embrace.

“He kept his composure, he played well and he kept fighting through all of that adversity we went through in the first half.  He played a heck of a ball game.”

Simmons would deliver again to Haynes, this time across the middle on a bullet pass between defenders to take the first Greenville lead of the night in overtime.

But the Eagles snapped the two-quarter-long drought on their first overtime possession in just two plays, thanks largely to a one-two punch from Evans and Tyes.

The second overtime possession didn’t go nearly as well for the Eagles, however, as a fumble backed the Eagles up to the 30-yard-line for a lengthy (and successful) field goal attempt.

But the Tigers found pay dirt courtesy of Moore’s extra effort as he stretched out to break the plain.

Plott said that it was his team’s response to adversity that gives him hope for the playoff road ahead.

“We always tell our kids that throughout a ballgame, bad things are going to happen,” Plott said.  “It’s always how you respond to it that determines what makes the difference,  and we came out in the second half and responded well.”

The Tigers find their third-round opponent in the Jackson Aggies next Friday night.

McKenzie falls to Maplesville in second round

McKenzie’s near-flawless season came to a close Friday night as the undefeated Maplesville Red Devils remained as such and defeated... read more