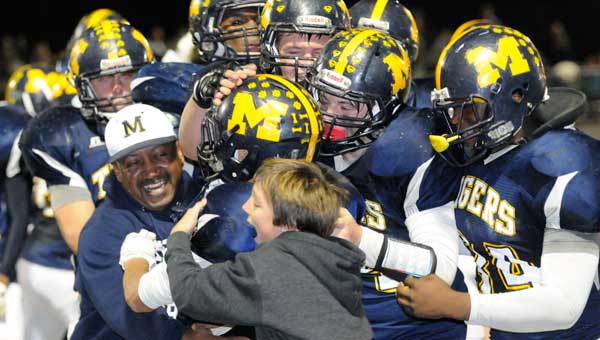 McKenzie receiver Condie Pugh is ambushed by coaches and teammates after making the game-winning catch against the Isabella Mustangs.

A Hail Mary from Terrance Clemons to Condie Pugh kept the McKenzie Tigers’ playoff hopes alive Friday night on fourth and 15 to topple the Isabella Mustangs 32-29.

It was more than a little appropriate that McKenzie head football coach Josh McLendon’s first words after congratulating his team were “God is good.”

“That’s playoff football—we expected a good game, and we got a good game,” McLendon said.

The Tigers trailed the Mustangs for the duration of the game until halftime adjustments allowed McKenzie to close the gap with a handful of stellar defensive series and key turnovers.

In contrast to a first half filled with false starts and miscues, it almost seemed as though a different Tigers team left the locker rooms for the second half.

But the biggest factor of all were two key turnovers within Mustang territory, one of which led to a 27-yard touchdown run from Ty Adams to tie the game at 26 apiece.

Though the initial run-in from Chris Shufford for the follow-up two-point conversion was good, a crucial holding call negated the score and inevitably led to overtime.

The McKenzie defense took to the field first after regulation, and fended off an aggressive Mustang run game to force a field goal to give Isabella a 29-26 lead.

Two critical misfires backed up the Tigers offense when it came their turn to respond, setting McKenzie up for a fourth down with 15 yards to score.

McLendon elected to go for it all after missing an earlier field goal from nearly the same distance, and Pugh answered the call.

“At the end of the night, you just have to believe in your players that when the game is on the line, they’re going to go up and make plays for you,” McLendon said.

“And Condie Pugh did that.  He hadn’t had a real good game all night, but he went up and made the play at the end of the game.  I was proud for him, and I knew he could make it, so we called his number and he was there.”

Pugh admitted that he’d been off most of the night, but that he was thankful for the opportunity to redeem himself.

“I knew he had faith in me—I’m just glad that he didn’t give up on me and gave me the chance to get the win.”

The Tigers find their next opponent in the Maplesville Red Devils, the no. 1 team in the state.

McLendon said that it would be the toughest test of the season thus far, but anything goes in the playoffs.

“They’re very tough, but we’re not going to shy away,” McLendon said.

“They’ve got a great program, and Coach Hubbert does a great job.  But we believe that anything can happen in the playoffs.  Games like tonight build character, so we’re just going to keep fighting and keep working to get better.”

The Notasulga Blue Devils rallied in the final minutes of the fourth quarter to reclaim the lead for the final... read more