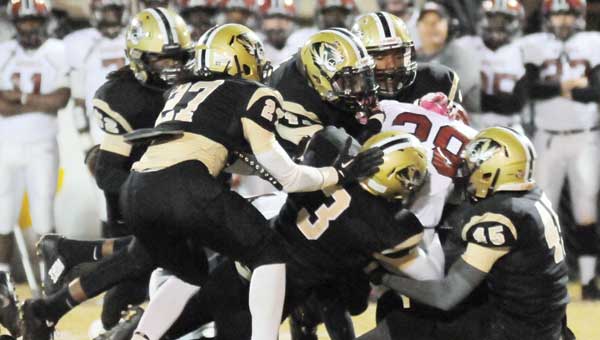 The Greenville defense proved as staunch as ever, holding a talented Sylacauga offense to only 14 points in the Tigers’ 35-14 first-round win.

Greenville put together a dominant first half and rolled over Sylacauga 35-14 in the first round of the Class 5A state playoffs Friday night at Tiger Stadium.

With a true spread offense, the Tigers were well balanced offensively, which was a big key in the win. Defensively, GHS gave no elbow room, stopping the Aggies in their tracks.

Early in the first quarter, GHS got things going when junior defensive back JaQuan Lewis ran a punt return 65 yards for a touchdown with 9:35 on the ticker. With the successful extra point attempt by Joseph Price, the Tigers led 7-0.

Having to go back out on defense didn’t spar the Tigers as they held the Aggies to a three-and-out.

GHS went ahead 14-0 on its next offensive series after a 7-play, 69-yard drive that was book ended by a 1-yard TD rush from senior running back Alyric Posey.

GHS head football coach Patrick Plott said it was a tail of two halves for his boys.

“We had a good first half,” Plott, who is in his first year coaching the Tigers said. “We didn’t play very well in the second half, but I’m proud. We were fortunate enough to get the win.”

Another key that aided GHS in the victory was its ability to make big plays. Draylen McGrew, a senior quarterback, hit senior wide receiver Ra’heem Moore for a 49-yard pass to help set up the 1-yard score from Posey.

Later in the second quarter, the Tigers got a good 52-yard gain from sophomore running back Brandon Simmons to spurt another TD. Simmons connected with Moore on a 10-yard pass and GHS led 21-7 with 10:09 left in the first half.

About 5 minutes later, McGrew hit senior wide receiver Myles Haynes on a 8-yarder with 5:38 left to go up big at 28-7.

The biggest play of the game came on Sylacauga’s next offensive series.

The GHS defense held the Aggies like it did all night, but the special teams rung the ball as Moore got a block on a punt try after a bad snap. Donovan Lindo, a senior wide receiver, picked up the loose ball and ran it back around 10 yards for the score and a 35-7 lead.

Plott said staying well balanced was a goal of the Tigers.

“We did a good job of that in the first half,” he said.

Plott said the key on defense was that it attacked well.

“Our guys take a lot of pride in not letting people score,” he said. “They did a good job of flying around to the football and putting a hat on people tonight.”

With the win, GHS improves to 9-2 on the season, and will host Calera, who beat Vigor 28-26, in the second round next week.

About mid way through the third, McGrew ran a 39-yard gain, but got injured on the play.

Plott said they don’t know the extent of his quarterback’s injury.

“We’ll know more in the morning after we see the doctor,” he said.

Plott said the injury occurred on his knee.

Sylacauga scored the only TD in the second half on a 32-yard pass from backup quarterback Keaton Wilson to junior wide receiver Devin Dates with 26.7 left to go.

Numbers on the board

Tigers aim to wrangle in high-powered Mustang offense McKenzie’s first-round opponent, the Isabella Mustangs, is a team gunning for a... read more