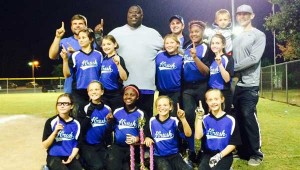 Marvin Barginere (back row, center-left) began a travel softball team in July that has since blossomed into a successful unit of 12 players ranging from ages 8-12. Tryouts for the upcoming season is set for Nov. 8 at Turner Park in Luverne, beginning at 9 a.m.

Having a child who plays travel ball isn’t easy.  Just ask Marvin Barginere, who often travels with his daughter several times per week to Montgomery to practice and play.

As a Luverne resident, the commute often made things more difficult than they needed to be.

But Barginere found a relatively simple solution—he’d just start an organization himself.

“Fast pitch softball is pretty big in the area, and a lot of girls continue to play travel softball and go to Hoover, Birmingham and Dothan,” Barginere said.

“And basically we reached out to the other girls in the area that might not have the financial means or might not want to go that to continue to play softball year-round.

“So we decided to start an organization here in Luverne to make sure that our girls here have a chance to play travel softball, develop a skill and maybe, down the line, get a college scholarship playing softball and doing something that they love to do.”

Barginere’s team has expanded to include girls from Greenville, Enterprise and Dothan.  And though managing players from multiple counties hasn’t always been easy, parents have alleviated a number of the potential scheduling nightmares.

“Here at Blue Krush, we’re blessed to have dedicated parents, and we try to make our practice time as flexible and convenient as possible for everyone because of the distance,” Barginere added.

“So we try to practice on Saturday mornings when we don’t have a tournament from 8:30 a.m. to 12:30 just so that our girls can go out and have the rest of the day with their families, because we don’t want to take up a whole day with just practice.”

There are additional, optional batting and pitching practices throughout the week, and Barginere said that his players are so dedicated that they often work on their own from home.

The team has found a great deal of success in its early stages, nabbing at least a second-place finish in four of six fall tournaments, and a first-place finish in others.

The success has had a direct impact on the team’s growth.  Blue Krush will kick off its next season in January with a 10-year-old team, but it has since expanded to include a team for eight-and-under and 12-and-under girls starting in the spring competing in NSA, USFA and USSSA softball.

“It grew quicker than we anticipated, and that’s a good thing when you’ve got people that believe in the same thing you believe in,” Barginere said.

But most importantly, it gives several girls in the surrounding counties another outlet of expression that differs from the norm.

“It leads to colleges looking at you, and the girls love it—it’s something for them to do, and girls aren’t limited anymore to just cheerleading as they have been in the past,” Barginere said.

“It opens things up for female sports.”

Blue Krush’s fall season will end this upcoming weekend, and tryouts for all three teams will be held on Nov. 8 beginning at 9 a.m. at Turner Park in Luverne.

Registration is set for 8 a.m. that morning.

There are many measures of success for a high school football team, but few are as apparent as the number... read more