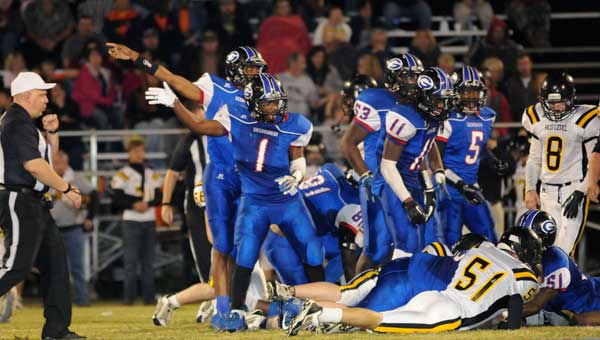 An impressive Georgiana defensive effort was bolstered by four Red Level turnovers, leading to a 41-0 shutout for the Panthers and the final region win of the season.

The Red Level Tigers were their own worst enemy Friday night in Georgiana as the Panthers capitalized on several early turnovers to take a commanding 41-0 homecoming victory over the Tigers.

The beginning of the Tigers’ woes came on a fourth-down punt in which the snap sailed well over the punter’s head, leaving the Panthers to secure the ball on Red Level’s seven yard line.

A short pass to Tarien Crittenden only moments later gave Georgiana its first of many scores on the night and an early lead.

The second drive for the Tigers was déjà vu as a second fumble deep within their own territory set up the Panthers for a short field, leading to a second touchdown only two catches later.

With an excited homecoming crowd and an abundance of momentum behind them, quarterback Alen Smith connected with wide receiver Jacquez Payton on a short slant route and, after breaking a few tackles, found himself in the end zone for the Panthers’ third score.

Payton would find the ball yet again, though this time on defense, for an interception and the third, and perhaps most disheartening, Tigers turnover of the night.

Georgiana head football coach Ezell Powell said that the Panthers defense certainly had a great deal of help from the Tigers’ turnovers, but that he was still impressed with his team’s ability to slow down the difficult-to-contain Red Level sophomore running back Johnathan Lee.

“We knew going into the ball game that #10 would be the hardest runner of the two, but we had to get to him before he got going,” Powell said.

“We had to gang tackle and get him on the ground because if he didn’t, he was going to do what he’s known for doing.  But we ran to the football and gang tackled, and we were able to rally and keep him down.”

The Red Level defense that left the locker rooms after the half had a great deal more fight, as linebacker Dameyune Scott stopped the Panthers cold on a goal line stand  a mere three yards from pay dirt.

But the Tigers’ offense sputtered out almost immediately, even on Lee’s tested legs, as Red Level went three-and-out after gaining barely enough ground to punt.

With the second half shortened to eight-minute quarters, Powell said he knew it would be an opportunity to rotate some of his younger players into the game, but it also provided a chance to keep the Red Level offense off the field.

After two failed scoring attempts from the underclassmen, freshmen JaMichael Stallworth connected with freshman Jamarcus Sims on a fourth-and-long hail mary to extend the Panthers’ lead to 41-0.

“I was happy to see that for the young man, because he had missed one earlier,” Powell added.

“I told him that you better redeem yourself this time, and he went up, made a great catch and a great run after the catch.”

The Panthers aim to end the season strong at home against the Highland Home Flying Squadron for senior night.