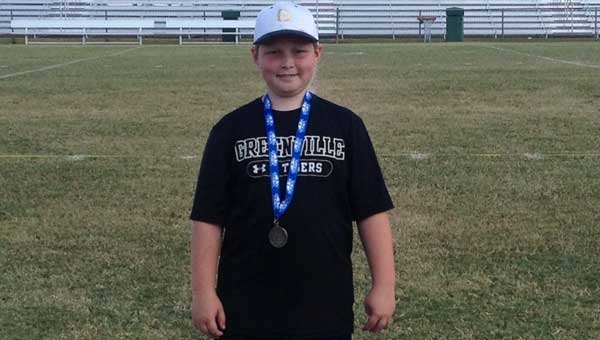 Hill seeks to return to Atlanta for the fourth time in as many years after taking first place in the sectional branch of the Punt, Pass and Kick competition in Dothan.

Greenville prodigy Christian Hill recently added another accomplishment to an already decorated career by taking the first-place finish at the sectional Punt, Pass and Kick competition this past weekend in Dothan.

Hill, who took the gold with a combined effort of 214 feet (that’s 67 feet punted, 78 feet passed and 69 feet kicked), is now in the running to return to Atlanta for the fourth time in as many years for the national round of the NFL competition.

The total is 25 feet farther than last year’s efforts.

The now-nine-year-old began his journey to Punt, Pass and Kick dominance at the age of five when he competed at the local level in Greenville and took the first-place spot in his age group, despite being a full year younger than the minimum age required to advance.

He received a certificate of completion for his efforts instead of a trip to Dothan, but Hill has made the grade in each of the four years to follow.

His father, Mandus Hill, is a constant figure on the sidelines and in backyards throughout the many afternoons of practice—Christian has practiced for months on end approximately four days each week.

But despite all of his support, he said that no one can take more credit for his son’s success than his son, himself.

“If he says ‘Daddy, let’s go play football,’ I’m right there with him,” Hill said.

“But it’s his desire to strive to get better every day.  He just loves football and baseball.”

Hill placed in the top of one of eight sectional competitions held throughout Alabama and Georgia, but the top spot alone doesn’t guarantee him a return trip to the Georgiana Dome for the final leg of the journey.

He has to place in the top four of the eight sectionals to advance.

But it’s a trip that Hill is very much looking forward to, as last year’s trip provided the opportunity to meet some of the biggest athletes on the Atlanta Falcons team, including Matt Ryan, Steven Jackson and more.

But the biggest star Hill met was a local graduate at Troy, Osi Umenyiora, who signed an autograph for him.

Talent can be cultivated, but work ethic is perhaps an even more important commodity in making it to nationals this year.

“There’s only so much a parent can do.  God gave him the talent, of course,” Hill added.

“There’s nothing that I’ve done or anyone has done that helped him.  But it’s his initiative to move forward with it and advance.”

Results will be made known in the final weeks of November, as all scores from the eight sectional competitions must be posted by December 1.