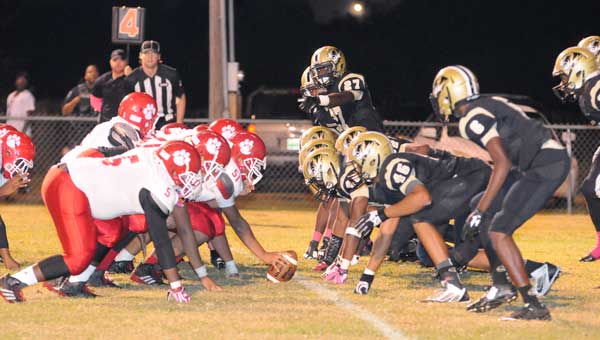 The Greenville Tigers earned its 30-0 shutout victory with a pair of impressive goal line stands, including one that forced a turnover on downs only inches shy of a Eufaula score.

The Greenville Tigers punctuated their quest for a regional championship with an exclamation point Friday night with a 30-0 shutout over the Eufaula Tigers, giving Greenville its first regional title since 2011.

Quarterback D’raylen McGrew and his supporting cast were a large contributing factor to the victory, but it was a stingy Greenville defense that set the pace for intensity throughout all four quarters with a pair of impressive goal line stands.

Greenville head coach Patrick Plott, who earned himself an impromptu ice bucket challenge after the victory, said that it’s his defense’s desire to get on and off the field in three downs or less that has shaped the Tigers’ success this season.

“Those guys take a lot of pride in playing great defense.  Coach Newton, Coach Jones, Coach Graham and Coach Palmer do a great job on that side of the ball in motivating those guys and keeping them going,” Plott said.

“Those guys play every play like it’s their last, and that’s what Coach Newton stresses to those guys.  And that’s what they’ve been doing.”

Though the Greenville depth chart has suffered a number of unfortunate injuries, including those sustained by junior running back Skilar Moorer and senior running back Alyric Posey, the Tigers have filled the gaps with a handful of talent from unexpected places.

Friday night, it was wide-receiver-turned-running-back Donovan Lindo’s churning legs that carried the Greenville offense, particularly on an early drive that ate up nearly half of the second quarter.

When Lindo wasn’t attacking on the ground, McGrew allowed wide receivers Javorris Cheatham, Myles Haynes and Ra’heem Moore to play jump ball against defenders with whom they had a clear height advantage.

“Donovan Lindo did a good job for us tonight,” Plott added.

“We did a good job offensively of mixing up the run and pass, and keeping them off balance.”

Eufaula’s prayers were eventually answered in the third with a Hail Mary that brought them to within just one yard of scoring.

But, following a penalty that backed up Eufaula five yards, the Greenville defense became the Berlin Wall in the next four downs to follow, stopping Eufaula cold with barely a foot shy of a touchdown.

Despite having a few more attempts at the end zone—including a second fourth-and-inches goal line stand capped off with a Greenville interception at the hands of Jaquan Smith—the deflated Eufaula offense wouldn’t recover from the ordeal.

Plott said that the regional championship meant a lot to him, given the success his team has had in only his first year.

“I’m proud—more so for the kids,” Plott said.

“They’ve worked so hard since I’ve been here for this, and their hard work is paying off.”

The Tigers aim to finish the season strong against their final region opponent, Rehobeth, on the road Friday.