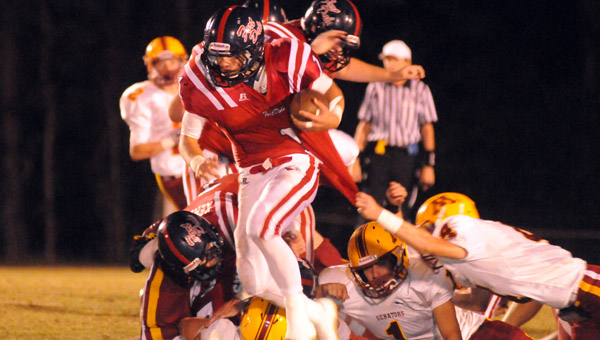 Burkett, who exited the game following the second half kickoff after suffering a concussion, rushed for 202 yards and three touchdowns on 10 carries in the Eagles’ 28-7 win over Class AAA, Region 1 rival Morgan Academy. Burkett’s third touchdown of the contest was his 42nd touchdown of his career.

Just prior to the start of the second half an announcement was made over the PA system that Burkett had tied the “unofficial school record.”

“Ryan has had a really good career,” FDA head coach James “Speed” Sampley said. “He’s the kind of player that does whatever is asked of him. He’s a fine young man, and it’s nice to see a kid like that set a record on senior night.”

Burkett was on his way to a career night against the Senators on Friday before his injury.

“We were able to put some points on the board, but we played sloppy,” Sampley said. “We turned the ball over and made I don’t know how many mistakes. You can’t normally do that and win.”

Junior quarterback Harrison Adams completed 30-of-58 pass attempts for 377 yards, including 212 yards in the second half, but tossed three interceptions.

Twice in the first half the Senators (0-8, 0-5 Class AAA, Region 1) turned the ball over on downs inside the Eagles’ 20 yard line.

“I thought our defense played hard,” Sampley said. “We gave up a lot of yards, but we made big plays when we had to and we were able to keep them out of the end zone for the most part.”

Adams scored the Senators’ lone touchdown on a 5-yard run in the third quarter.

Fort Dale senior Sawyer Kendrick rushed for 158 yards and a touchdown on 14 carries, while senior John Chambliss tallied 14 tackles, three sacks and an interception in the win.

“We have to shift our focus in a hurry,” Sampley said. “We’ve got to win to get in. Pike is a lot better team than they have been the last couple of years. We’re going to have to be ready to play.”

Fort Dale and Pike Liberal will square off at 7 p.m. next Friday in Troy.

Morgan will be back in action at home against Hooper Academy next Friday. Kickoff is set for 7 p.m.